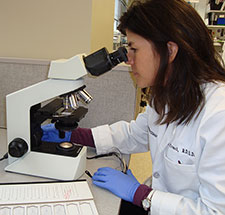 Dr. Gail Cresci, an Army Veteran, is a gastroenterology researcher at the Louis Stokes Cleveland VA Medical Center. She specializes in the gut microbiota, the complex community of microorganisms in the gastrointestinal tract, focusing on how bacterial dysfunction can seriously affect one’s health. She’s also a staff member at the Cleveland Clinic, where she conducts lab and clinical nutrition research and mentors staff dietitians. Previously, she was at the Medical College of Georgia for 17 years, working as an associate professor and the head of surgical nutrition services in the department of surgery. She’s been recognized many times for her research and clinical work and most recently received the prestigious Stanley J. Dudrick Research Scholar Award in 2018 from the American Society for Parenteral and Enteral Nutrition.

I was getting my bachelor’s degree in dietetics at the University of Akron. To be a dietitian, you must do an internship. The Army and Air Force recruiters came to my school, and I met with them. I was more impressed with the Army recruiter than the Air Force one. I was out of money and many internship programs charge a stipend. I didn’t have the funds. I had also applied to internship programs at VA medical centers. The military internship programs do a computer matching, like they do in medical schools. I ranked the Army as my first choice, and I matched! I had no prior military experience. Although my father was in the Coast Guard, I was the first and only one among my five siblings to join the military. Because I had a bachelor’s degree, I was commissioned as a second lieutenant and sent to Fort Sam Houston in San Antonio to do basic training. It was interesting because about 100 other newly commissioned officers were also there. We were educated on how to wear a uniform, salute, and march.

I met a surgeon who was interested in nutrition while I was stationed in the early 1990s at Eisenhower Army Medical Center at Fort Gordon in Augusta, Georgia. He had a doctorate and invited me to participate in a research project. He left the military and went to the department of surgery at the Medical College of Georgia. I followed him about six months later and worked in the Medical College of Georgia as a surgical nutritionist in the department of surgery. I became involved with many research projects with surgical residents and medical students. Nutrition-based research is really lacking evidence, so several years later I enrolled in the graduate studies program at the Medical College of Georgia to obtain my doctorate in biomedical sciences. I majored in biochemistry and molecular biology. Soon after earning my doctorate, I was recruited by the Cleveland Clinic to continue building my research program and to direct research in the clinic’s Center for Human Nutrition. 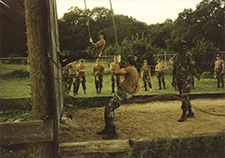 Cresci (seen coming down the wall) takes part in an Army training course at Fort Sam Houston in 1991.

Cresci (seen coming down the wall) takes part in an Army training course at Fort Sam Houston in 1991.

I completed my basic training and advanced courses at Fort Sam Houston. I did my dietetic internship program at Walter Reed Army Medical Center in Washington. My first duty assignment following training was at Landstuhl Army Medical Center in Germany, where I was chief of clinical nutrition services. I was involved with taking care of patients in the hospital and in outpatient clinics, as well as overseeing nutrition services in the defense school systems and in child care development services. My last assignment was at Eisenhower Army Medical Center, where I served as a clinical dietitian in the hospital. I was also interested in writing and, starting in Germany, I wrote nutrition articles for the Stars and Stripes, an American military newspaper. I continued to write for the newspaper at Fort Gordon.

I conduct lab-based basic science and clinical research at the Cleveland VA, focusing on the gut microbiota. I aim to develop nutritionally targeted therapies to correct organ pathology. Currently, I have animal models of ethanol-induced gut-liver injury, as well as antibiotic-induced intestinal and immune dysfunction, with an emphasis on the growth of Clostridium difficile [C. diff], an infection that can cause diarrhea, nausea, and abdominal pain. With these models, I’m working to develop targeted probiotic and prebiotic therapies to mitigate disease. My clinical practice specializes in digestive diseases, critical care, and surgery. I collaborate with nutritionists and physicians on many projects in these areas. My research interests impact Veterans, such as those who are exposed to antibiotics during deployment and may later develop Clostridium difficile or functional gut disorders as a consequence. Many Veterans also develop substance abuse disorders, including alcoholism.

Absolutely! As an active-duty dietitian in the Army, I was able to experience firsthand the exposures that service members and Veterans have to many nutritionally related digestive disorders. Working to discover nutritionally based therapies to lessen these burdens for service members carries over to their family members, as well as people not serving.

Yes, absolutely. I appreciate why Veterans have the medical concerns that I’m studying because I served and have friends who have also served in the military. When someone enters the service they are young and usually unaware of the exposures they’ll encounter and how those exposures may impact their lives after they exit the military.

For one, try things out of your comfort zone and never give up! Also, show that you can accept failures as a learning experience and grow from them. I’m not sure if I got my “grit” from being in the military. But I know that I learned many life skills that I continue to use every day.

In the near future, I’d like to apply for a VA Merit Review research award. I would be thrilled and honored to have a lab at a VA medical center. I currently collaborate with a doctor who has a lab at the VA hospital in Cleveland.