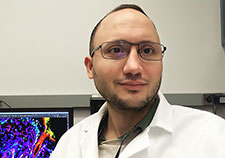 Dr. Gabriel Gonzalez is completing a fellowship in research biology at the VA Boston Healthcare System

Dr. Gabriel Gonzalez is completing a fellowship in research biology at the VA Boston Healthcare System.

Dr. Gabriel Gonzalez is completing a fellowship in research biology at the VA Boston Healthcare System. His main interest is in stem cell biology and regenerative medicine, or the process of replacing, engineering, or regenerating cells, tissues, or organs to restore normal function. He’s researching how stem cells can be used to repair skin and the cornea and has authored 15 papers. After the 9-11 terrorist attacks on the United States, he served for four years in the Air Force as a medical laboratory specialist. He was awarded the Global War on Terrorism Service Medal.

My family has proudly served in the military for generations. My grandfather and my dad served in the U.S. Army. I joined the Air Force ROTC during my first year in college but decided to focus on my academic major, biology. However, after the 9-11 attacks, I felt a moral obligation to enlist in the Air Force, which turned out to be a great decision.

My research career was inspired by the images of military Veterans that had suffered severe burns while on active duty. I truly respect the commitment of these soldiers. My way of thanking them for their service is to pursue therapies that have the potential to heal their scars.   My research career was also inspired by science-fiction literature and television programming that focused on science and technology, such as the Discovery Channel network.

I consider my parents my primary mentors because they provided me with the right guidance and supported my decisions when I decided to join the Air Force and later when I decided to pursue a master’s degree and a doctorate in biomedical sciences at the University of Texas Health Science Center in Houston. 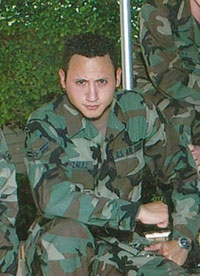 Gonzalez served four years in the Air Force as a medical laboratory specialist.

I’m investigating the potential use of stem cells for regenerative medicine in the laboratory of Dr. Natasha Frank at the VA Boston Healthcare System. In Dr. Frank’s lab, we use diverse experimental models based on our ability to isolate pluripotent cells from normal human tissues using a new molecular marker called ABCB5. We aim to recognize the mechanisms of stem cell regulation and self-renewal, both of which contribute to regenerative wound healing. In particular, we investigate whether transplanting stem cells isolated from the skin can improve wound healing in Veterans suffering from war-related injuries and other chronic conditions, such as diabetes and peripheral vascular disease. I have studied the molecular pathways used by cells to affect the development and regeneration of thin tissue that form the outer layer of the body’s surface. These genetic pathways often become altered in many disease states, such as cancer. I plan to apply for VA eligibility so I can apply for VA and National Institutes of Health research funds.

My military service inspired me to pursue a career in research. After completing my doctorate, I was very pleased to find out that VA has such a great and well-funded research program. I immediately applied to join the ranks as a research biologist. At VA, my goal is to find better treatments and clinical applications that will enhance the quality of life for Veterans.

Chronic skin wounds pose major health problems for Veterans with diverse medical conditions, such as wartime-sustained trauma, spinal cord injury, diabetes, and vascular insufficiency. Many troops have experienced severe traumatic injuries, such as spinal cord injury and massive burns, during the conflicts in Iraq and Afghanistan. My current research project may result in significant improvement in treatments available to Veterans with chronic non-healing wounds.

Absolutely, I believe working side-by-side with other military personnel grants a deeper insight into the psyche of Veterans. Also, we serve for years in tight-knit communities and thus camaraderie is very important.

My personal advice to other Veterans is to take full advantage of the GI Bill and other educational opportunities offered to those who serve. Moreover, it is important to apply values learned in the military, such as courage, integrity, and commitment, to the civilian workforce and to push yourself to achieve your goals. For example, when I was a senior airman my goal was to attain a doctorate in science. So I reached out to people who could help me with that endeavor. I built the courage to reach out to lieutenants and majors, as well as civilians who gave helpful advice. I was accepted to graduate school, which took many years of commitment. But I focused on my goals and achieved my goals.