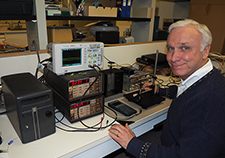 Dr. Frank Greco, an attending physician at the Edith Nourse Rogers Memorial Veterans Hospital in Bedford, Massachusetts, has been awarded three patents, one of which is being commercialized as a potential way to diagnose Alzheimer's disease.

Dr. Frank Greco, an attending physician at the Edith Nourse Rogers Memorial Veterans Hospital in Bedford, Massachusetts, has been awarded three patents, one of which is being commercialized as a potential way to diagnose Alzheimer's disease.

Dr. Frank Greco believes his research makes life better for Veterans. An attending physician in the Geriatric Psychiatry Unit at the Edith Nourse Rogers Memorial Veterans Hospital in Bedford, Massachusetts, he carries out studies on applying physical and mathematical methods to solving medical problems. He's been awarded three patents, one of which is being commercialized as a potential way to diagnose Alzheimer's disease. He has several decades of teaching experience in medicine and clinical chemistry, as well as many years of hospital appointments. Commissioned into the U.S. Naval Reserve in 1989, he later deployed to a fleet hospital in Saudi Arabia during Operation Desert Storm, before returning to the reserves and retiring in 2011 after 22 years.


Greco: My father and all of my uncles served in World War II. As I grew up, contributing to the defense of our country seemed natural, almost necessary. I had a student deferment for part of the war in Vietnam. When my turn for the draft lottery came up, my birthday drew 285, and I finished my education without concern about being drafted. I always felt guilty. During my internship, one of my patients was a retired commander of an attack submarine. At that point in my life I had met many men whom I respected but none like this commander, whose character also embodied physical courage and incredible self-control. Meeting him inspired me to seek a commission in the Naval Reserve. Within a year I was mobilized for Operation Desert Storm and deployed with Fleet Hospital 15. Personally, I received two benefits from this deployment: I no longer felt guilty about not having gone to Vietnam, and I liked the people I worked with, which convinced me to remain in the Naval Reserve. 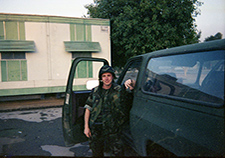 While in the U.S. Naval Reserve, Dr. Greco was the head of a laboratory on a fleet hospital in Saudi Arabia during Operation Desert Storm.

While in the U.S. Naval Reserve, Dr. Greco was the head of a laboratory on a fleet hospital in Saudi Arabia during Operation Desert Storm.

When I was 17, I had appendicitis. My experience in the hospital got me thinking about becoming a physician. As I took the required premedical science courses, my latent interest in mathematics and science was reawakened, and I decided to pursue medical research.


Did you have mentors in your youth or at any other time who inspired you in life, the military, and-or in your research career?

Miss Hamilton, my high school geometry teacher, would be the first teacher who really encouraged and inspired me. Although I did not emerge from the 1960s unscathed, she helped to minimize the damage while nudging me onto the right track. In graduate school, I was fortunate to work with Morris Schreiber, a mathematics professor. Learning mathematics from him was like going through psychoanalysis. Every idea I had was dissected out from the others, examined, and put back to make a new structure. It was a transformative experience.

In Operation Desert Storm, I was head of the laboratory for Fleet Hospital 15. We were deployed with the 1st Marine Division outside of Jubail in Saudi Arabia. Fortunately, there were few battle casualties, and our experience there was similar to any big city hospital. As a reservist, I worked at every major naval hospital up and down the East coast. My longest stint was teaching at the Naval Undersea Medical Institute in the Naval Submarine Base New London in Connecticut. There, I taught mostly independent duty corpsmen and some undersea medical officers. A bonus of working here was the realization that I was stationed at the homeport of the commander who inspired me to join the Navy.

My research involves applying mathematical and physical methods to solve medical problems. I have been awarded three patents for these applications, one of which is being commercialized by Headwall Photonics and could help with the early diagnosis of Alzheimer's disease. Another patent involves a method for studying blood clotting, which could have applications in diving medicine, the diagnosis, treatment, and prevention of conditions caused by humans entering the undersea environment. Although my board certification is in laboratory medicine, specifically clinical pathology, my current practice is essentially general internal medicine. My research for the most part may help all people, including Veterans. The clotting research may specifically help divers.

My teaching at the Naval Undersea Medical Institute led directly to one short paper on the interpretation of breath sounds. It also influenced my work in blood clotting, although I have not yet pursued the connection with diving medicine.

My understanding is that the VA research program started as a way to attract academic physicians into the VA system. There would be intramural funding and protected time to do the work. This research spirit—to continually try to make things better—would then enlighten the community. In this sense, I believe my research makes life better for Veterans every day. I hope that the actual research will help in the future.

You have to discover what you love. This is not as simplistic as it sounds because there are some things that you have to work at and become proficient in before you know whether you love them (e.g., playing a musical instrument). You can spend a lot of time getting good at something only to discover that it's not for you. Once you find it, however, time spent doing it never feels like work.