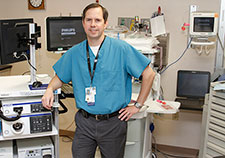 Dr. Erik von Rosenvinge, a U.S. Air Force Veteran, is the chief of gastroenterology for the VA Maryland Health Care System. He has been the local principal investigator for a series of large multicenter studies, including one on colorectal cancer screening for Veterans, and has authored or coauthored dozens of published papers. He’s also an associate professor at the University of Maryland School of Medicine and was named Faculty Teacher of the Year in the school’s division of gastroenterology and hepatology in 2018. He served in the Air Force from 1999 to 2006, reaching the rank of major, and earned multiple honors, including the Meritorious Service Medal and the Aerial Achievement Medal.

My father is a physicist who spent his career at NASA, performing research on the sun, comets, and intergalactic cosmic rays. Many of his friends, and my childhood friend’s parents, were also NASA scientists. As such, science and research were frequent topics of discussion in my home and were emphasized. I attended a science and technology magnet program for high school and studied biochemistry as an undergraduate at the University of Maryland. While in college, I received a Howard Hughes Medical Institute Undergraduate Research Fellowship and worked in the laboratory of a biochemistry professor, Dr. Richard Armstrong. In the lab, I purified and crystalized a protein so that its structure could be solved by X-ray crystallography. Seeing my efforts contribute to knowledge and result in publications was inspiring. 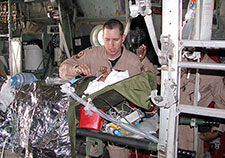 I completed my residency in internal medicine from 1999 to 2002 at the David Grant USAF Medical Center at Travis Air Force Base in California. Today, the David Grant Medical Center is the Air Force Medical Service’s flagship medical treatment facility. The terrorist attacks on September 11, 2001, occurred early in my third year of training. After residency, I was stationed at Andrews Air Force Base in Maryland, where I worked in the internal medicine clinic and attended on the inpatient service. I also trained at the USAF School of Aerospace Medicine in San Antonio and at the University of Cincinnati to become a team chief for a critical care transport team.

In this role, I deployed twice in support of Operation Enduring Freedom and Operation Iraqi Freedom, first in late 2003-early 2004 and again in the second half of 2005. Our team’s job was to set-up a small intensive care unit in the back of Air Force cargo planes and fly critically injured and ill service members from the wars in Iraq and Afghanistan to higher levels of care within the theater, Germany, or the United States. Many of our patients suffered from horrible injuries, often as a result of improvised explosive devices. The dedication of our injured service member patients was inspiring. While many were unable to talk, several of those who could repeatedly asked when they could return to their unit, despite their missing limbs and other dramatic injuries. For this work, I received the Aerial Achievement Medal for sustained aerial meritorious achievement in a combat zone.

I’ve served as the local principal investigator for three studies funded by the VA Cooperative Studies Program that are focused on improving the lives of Veterans. One of the studies is completed and two are underway.

In the first study, we investigated how to best manage Veterans with acid reflux symptoms that do not respond to standard medication treatments, a common clinical problem. We found in the population studied that surgical treatments were superior to additional medication therapy.

The third study, called OpTION, is comparing treatments for a recurrent colon infection with a difficult-to-treat germ called Clostridium difficile, or C. diff. The national co-chairs for this study are Dr. Dale Gerding and Dr. Stuart Johnson, an Air Force Veteran. Both men are at the Edward Hines, Jr. VA Hospital in Illinois.

My military career did inspire me to work for VA; I wanted to give back to Veterans. I was personally conflicted about separating from the military. But by working for VA, I have been able to continue my connection to the military and Veterans. This has benefited me personally.

Veterans are special and unique. Many have given much to serve our country. We should do all we can to support them. It’s important to include Veterans in research and is equally important that the Veteran population directly benefit from research studies in which the Veterans participate. It’s rewarding to know that the research I perform may improve the lives of Veterans.

Absolutely. In my experience, when my Veteran patients and Veteran research participants learn that I am also a Veteran and that I understand military life and jargon, it creates a closer relationship. As a Veteran, I’m committed to serving and am passionate about serving my fellow Veterans through the clinical work and research that I conduct at VA.

I currently serve as the chief of gastroenterology for the VA Maryland Health Care System. I’m considering higher-level leadership positions within VA. But I’ll continue to have a strong research component no matter what position I achieve.