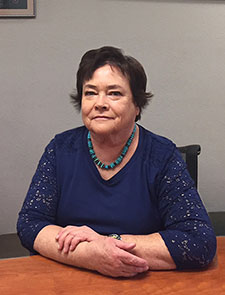 Dr. Elizabeth Hill is the associate chief of staff for research at the VA Sierra Nevada Health Care System.

Dr. Elizabeth Hill is the associate chief of staff for research at the VA Sierra Nevada Health Care System.

Dr. Elizabeth Hill, an Army Veteran and a registered nurse, is the associate chief of staff for research at the VA Sierra Nevada Health Care System. Her major research responsibilities are supervising the conduct and regulatory aspects of industry- and VA-sponsored clinical trials being conducted at the hospital. She’s a member and past chair of the Nursing Research Field Advisory Committee to VA’s Office of Nursing Services. The committee strives to develop nurse- scientists who are involved in research that improves health care for Veterans. Before coming to VA in 2007, she served in a series of roles in the Army for two decades, including nursing. She’s a three-time winner of both the Army Commendation Medal and the Meritorious Service Medal. She has also worked as a community health nurse with the Navajo, Apache, and Hope tribes in Arizona.

I was influenced by a number of things. Both of my parents served in World War II. My mother was an Army nurse in the Philippines, and my father was in the Army in the European theater. I didn’t want to spend my entire career in one spot in one job. I like change and certainly got that in the 20 years I was on active duty. Every assignment was something completely different from the last. And as a single parent looking to the future, I saw that the benefits were very appealing.

I was first stationed at the William Beaumont Army Medical Center in Texas. All of my clinical experience was in the trauma and surgical intensive care unit (ICU). Patients with lines and tubes running everywhere would be left on heating and cooling blankets because it was too difficult to remove the blankets from under the patient. This was detrimental for patients already at risk of skin breakdown. I was certain it would be just as effective to put the blankets on top of the patients, and my supervisor, Major Carol Pienadz, said, “OK, then do a research project to demonstrate that.” I did, using staff instead of ICU patients. The cooling and heating were actually more effective over the person than under, as well as being more comfortable and easier to manage. It didn’t really strike me until then how research could change practice. I was also assigned to the U.S. Army Medical Research Institute of Infectious Diseases (USAMRIID) in Maryland, where all we did was research. Later, I became the deputy chief of clinical investigation at Tripler Army Medical Center in Hawaii, where I managed both human and animal research. I also had the opportunity to do my own research, although it was largely what the Army needed done. So my research path was set.

My life mentor was my mother. She was the most independent, practical, and kind person I’ve ever known. In my first assignment in the trauma unit at the William Beaumont Army Medical Center, I had a section chief, Lieutenant Colonel Pat Bassett, who was an excellent role model. In my first head nursing position there, I had to rate a nurse whose practice was below standards. I knew that at this stage in her career, a bad rating would probably seriously damage if not ruin her professional life. I talked to Lieutenant Colonel Bassett, who asked, “Captain Hill, would you want to go to war with her?” To this day, I use that to make decisions about evaluations and people in general. I also had a head nurse, Major Pienadz, who never failed to give all of the credit for projects to the staff. She said that when her staff was a success, she was a success. In both the military and research, Colonel Bonnie Jennings was a significant mentor. She never stopped pushing me. Colonel Kathy Roehr was also a mentor of mine in the military and VA. In fact, she convinced me to apply for a job at VA Sierra Nevada. 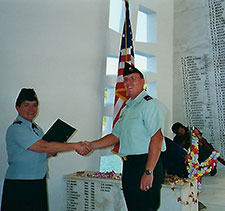 Hill, who comes from a military family, served 20 years in the Army as a nurse and researcher.

Hill, who comes from a military family, served 20 years in the Army as a nurse and researcher.

I served at the William Beaumont Army Medical Center, USAMRIID, Fitzsimmons Army Medical Center in Colorado, Tripler Army Medical Center, and Madigan Army Medical Center in Washington state. While at USAMRIID, I went with a team of physicians to Sweden to consult on the care of a patient who had what appeared to be a type of Marburg virus disease, an often fatal illness. I also managed high-containment isolation at USAMRIID. This led me to be involved in an incident with a facility that was selling monkeys to research laboratories. The monkeys were found to be infected with the Ebola virus, another severe, often fatal illness that is transmitted to people from wild animals. I was responsible for USAMRIID personnel going in to decontaminate the facility. While at Tripler, I deployed for a military exercise in South Korea. I had the chance to visit the Demilitarized Zone separating the two Koreas. That’s something everyone should experience to make you appreciate your freedom and freedom of speech.

Much of my research in the Army was related to needs of active-duty personnel. I was involved in research on how telemedicine is viewed by active-duty personnel. I was the funded principal investigator in collaboration with Oceanit Laboratories in Honolulu on a study using piezo electric material that could be embedded in stretchers on Medevac helicopters to measure pulse and respiratory rate. As a civilian, I was a life-flight nurse in Houston. The vibration in helicopters makes it difficult to monitor pulse and respiration, but the vibration didn’t affect those measures picked up by the piezo electric material.  While the military never used the piezo material, it is now being marketed by Oceanit as part of a hospital bed that picks up pulse and respiration. I’ve also done research on women affected by partner violence, which was my own area of interest. I’ve been the thesis chair and mentor for nurses in the Army nurse anesthesia program. At VA. I was also an associate investigator on a Gulf War illness study. I’m now a lead investigator for an ongoing VA-funded study, “Patterns and Experiences of VA Maternity Care Coordination for Women Veterans.”

My military career kind of coincidentally took me down that path. I found that being involved in research is what I love the most to do, whether it’s doing research myself, mentoring others, or managing clinical trials. It makes me one of the fortunate ones who love their job.

It’s a critical aspect of research for me. My mother was a World War II Veteran, my daughter served in Iraq, my sister was in the Air Force, and I’m retired military. Research on the health of women Veterans is critical to me.

Absolutely. Not only is it a personal thing, but I’m often frustrated when I see non-Veterans doing research that doesn’t address military variables, such as branch of service, rank as enlisted or officer, military occupational specialty, or where the person served. Those factors can lead to great variations in findings.


Based on your life experiences to date, what do you believe are the keys to success?

Don’t hesitate to jump into new challenges. I may not have always made the best career choices. But I’ve never made one that I regretted or one that I spent a lot of time debating whether I should make. I just did it and assumed it would work out for the best. Take the career path that makes you happy.

My plan is to stay right here in this job until I retire. I’ve had a great career. I couldn’t have asked for anything better.