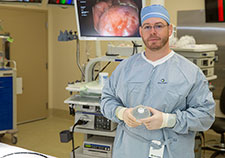 Dr. Edward Jones, an Army reservist, is the section chief of general surgery and the interim director of advanced surgical endoscopy at the VA Eastern Colorado Health Care System. (Photo by Shawn Fury)

Dr. Edward Jones, an Army reservist, is the section chief of general surgery and the interim director of advanced surgical endoscopy at the VA Eastern Colorado Health Care System. (Photo by Shawn Fury)

Dr. Edward Jones is in the Army Reserves. He’s the section chief of general surgery and the interim director of advanced surgical endoscopy, a minimally invasive form of surgery, at the VA Eastern Colorado Health Care System in Denver. He offers a range of endoscopic treatment options for common surgical diseases. He also pursues clinical and basic science research projects in surgical and endoscopic energy devices, as well as in cancer outcomes. More than 40 of his papers have appeared in academic journals. He earned an excellence in research award from the Society of Gastrointestinal and Endoscopic Surgeons and the Army Achievement Medal. He’s also an assistant professor of surgery at the University of Colorado.

I’ve always been interested in the military. I planned to join at multiple points in my life for a number of reasons. After high school, I wanted to join because the military sounded super cool. After college, I wanted to join so I could continue being an athlete and learn to become a leader. After medical school, I had $250,000 in student debt that I needed to start paying off. After surgical training, I wanted to be part of something bigger than myself and to help care for soldiers who put their lives on the line for our country and freedom. The loans haven’t gone away, either.

Great mentorship! Dr. Tom Robinson, the chief of surgery at the Eastern Colorado VA, encouraged me to start a research project during my surgical residency. He introduced me to energy device research by revealing that only a few physicians and manufacturers fully understand how these devices function. This left me dumbfounded. I couldn’t imagine that the energy devices we use in nearly every surgical and treatment procedure weren’t completely understood! These tools are used to make incisions and to stop bleeding. This gave me a strong desire to investigate these devices and teach other physicians their benefits and drawbacks. That desire has resulted in more than 50 different research ideas and projects in the last eight years. And we still have much work left to do! Dr. Robinson also recruited both me and my wife, Teresa, to return to VA as academic surgeons. He has been with us through hard times and good times and is always willing to listen and lend a hand.

In addition to Dr. Robinson, have you had mentors who inspired you in life, the military, or your research career?

I’ve had many mentors in my life and would not be where am I without their help. Beginning with my grandparents, who both served in the military, to my parents and siblings, my family has always provided mentorship and support. Without that, I would never have made it through college, let alone medical school and residency.

Dr. Robinson introduced me to another Veteran who had who patched up soldiers on the beaches of Normandy during World War II, Dr. Ben Eiseman. Before passing away a few years ago, Dr. Eiseman published more than 450 manuscripts and remains one of the giants of surgery and medical research. In addition, two people decided to take a chance on me and Teresa by accepting us as a “couple” and have provided near-continuous mentorship for the last 10 years: Dr. Frederick Grover, a prominent researcher in cardiac surgery and a long-time VA surgeon, as well as the former chief of surgery at the University of Colorado; and Dr. Mark Nehler, the surgical residency program director at the University of Colorado.

Finally, my unit commander, Dr. Scott Armen, provides mentorship and motivation and leads by example. He does this as he balances his family, his academic career as chief of the division of trauma critical care at Penn State University, his ongoing deployments to Iraq and Afghanistan, and his recent promotion as a consultant to the U.S. surgeon general.

I joined the Army Reserve during my last year of a surgical fellowship in Ohio in 2014 and am on active duty now at Evans Army Community Hospital in Fort Carson, Colorado. Upon commissioning, I was assigned to the 629th forward surgical team in Blacklick, Ohio. During the six months I spent in Ohio before moving back to Denver, I drilled regularly with this small, 40-member unit and forged new friendships and bonds that I will maintain long after I get out of medicine and the military. The 629th is an incredible unit. It’s designed to be ready to receive patients and perform surgery in difficult conditions just two hours after arrival. To always be prepared, we train regularly as a team. The general-trauma surgeons in the unit deploy to locations in the U.S. and overseas nearly every other year. This is extremely demanding on the unit and their families. However, the work is both important and rewarding, no matter whether you are in Afghanistan or Colorado Springs. The support required by family and friends can’t be understated and is essential to my and the team’s ability to function at a high level, especially given the high deployment tempo.

I chose to focus on areas that will impact many Veterans. With my training being surgical in nature, I’ve found a niche in surgical energy devices, in endoscopy, and in research aimed at reducing complications and death after surgery. I work in conjunction with my wife, Dr. Teresa Jones, a general surgeon and a critical care doctor at the Eastern Colorado VA. During the past two years, she’s implemented a mechanism that has reduced the surgical mortality by almost 50 percent when compared with VA quality predictions. This mechanism has the potential to positively impact every Veteran who undergoes surgery!

I’m currently working on an animal model of cardiac pacemakers and defibrillators to analyze potential malfunction or inadvertent shocks when patients undergo surgery or endoscopy. Similarly, we recently published several studies and a comprehensive review on operating room fires. We identified common alcohol-based skin preps as an easy fuel for fires. Dr. Kris Wikiel, Dr. Jason Samuels, Dr. Heather Carmichael, and I created a carbon dioxide-based device that reduces the risk of fires to near zero. We’ll be presenting on that at the Society of Gastrointestinal and Endoscopic Surgeons conference in April.

We have other projects in the works, including animal studies by Dr. Carlton Barnett that evaluate the impact of thermal ablation on liver tumors. Dr. Kris Wikiel is pioneering the evaluation of energy devices in relation to chronic pain and recurrence after groin surgery. Dr. Tom Robinson, who is already a world-renowned expert in geriatric surgery and frailty, has nearly completed a pilot study looking at recovery after surgery as predicted by the number of steps a patient takes. In short, this is a very exciting time at the Eastern Colorado VA, as we continue to push the boundaries in many areas of research and surgical patient care.

My military experience began just a few months before I started at VA, so these are largely unconnected. That being said, the relationships I’ve created in the military have promoted additional study in areas I had not considered. For example, collaboration with Dr. Scott Armen and Dr. Mike Matos has expanded the use of endoluminal vacuum therapy in gastrointestinal openings. This is a cutting-edge technique where a hole, usually as a result of trauma or surgery in the esophagus, stomach, or rectum, can be sealed with a sponge connected to a vacuum, instead of surgically removing the organ! This has revolutionized the treatment of gastrointestinal wounds.

In the end, the goal of our research is to make life better for our Veterans and for all patients. Our research is particularly beneficial to Veterans who, unfortunately, have higher rates of co-existing conditions, such as heart disease and diabetes, as well as exposure to unique situations and chemicals. Thus, reducing their surgical risk or improving the chances that their cancer will be cured results in more quality-of-life improvements, for example, than someone who does not have co-existing conditions or chemical exposures.

I feel a close kinship with my patients. I’ve served with them and experienced life with them as a reservist and active duty surgeon. While I have not served in a combat zone, there’s an immediate comfort in the doctor-patient relationship when my patients realize that I’m in the military, as well.

I’ve always believed there are two types of mentors in this world–those you choose to emulate, and those you choose not to. Finding mentors to help you is essential. Nearly every successful person has stood on the shoulders of another and would be happy to tell you about it! It’s also important to realize when someone is doing the wrong thing and, if necessary, to have the courage to call him or her out on it. You should also identify the mistake and make sure to avoid replicating it when it’s your turn to shine.

Lastly, enough cannot be said about the value of hard work and determination. In retrospect, it often seems that I was the closest to giving up immediately before I succeeded. Sometimes, you just have to put your head down and do the work in order to be successful. My father is fond of saying, “You can outwork 95 percent of the world; the other 5 percent, you have to outsmart.” Most of us would be happy just to be in the top 95 percent. That’s totally achievable by putting your nose to grindstone.

I’m applying for large federal grants, including a VA Career Development Award and a VA Merit Award, to further evaluate energy use and cardiac pacemakers. In addition, Dr. Kris Wikiel and I are seeking to establish the only comprehensive bariatric surgery program in the largest VA region: VISN 19. Bariatric surgery involves a series of minimally invasive procedures on people who are obese. We are proud to include bariatric endoscopy at VA Eastern Colorado, one of only two VA medical centers that offer Veterans this safe and effective technique outside of a research protocol.