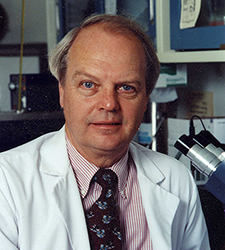 Dr. Dennis Stevens is an infectious disease specialist at the Boise VA Medical Center in Idaho.

Dr. Dennis Stevens is an infectious disease specialist at the Boise VA Medical Center in Idaho.

Dr. Dennis Stevens is a world-renowned clinician-scientist at the Boise VA Medical Center in Idaho. An infectious disease specialist, he loves taking care of the clinical needs of Veterans and wants to help them in any way he can. By researching diseases that have plagued Veterans for decades, he believes he can improve care not only today but also for future generations of service members and Veterans. In his nearly five decades as a VA researcher, Stevens has earned many honors, including the prestigious Society Citation Award in 2000 from the Infectious Diseases Society of America for his lifetime achievements in research, medicine, and teaching. He has also written more than 170 manuscripts and has edited and contributed to dozens of medical and scientific textbooks.

Stevens: My father always encouraged me to "be the best I could be." He said if you are going to serve in the military, you should become an officer. I enrolled in the ROTC at the University of Montana.

As an undergraduate, I read a book called the "Microbe Hunters" by Paul de Kruif. He described microbiologists in history that tried to determine the cause of cholera, typhoid fever, malaria, and other diseases. I majored in microbiology at the University of Montana. I did special projects on bacterial growth with Dr. Matsuri Nakamura and was inspired by a pathogenic microbiology course taught by Dr. James Taylor. In graduate school, I learned the principles of deductive reasoning and pathogenesis, but with emphasis on the pathogen. During medical school and medicine residency at the University of Utah, I became aware of host factors involved in pathogenesis. While a resident, I encountered many faculty members that were outstanding clinicians, excellent teachers, and dedicated researchers. I decided that that is what I wanted to do.

You've been a researcher in VA for nearly five decades? How does that feel?

I have been a researcher at the Boise VAMC since 1979 and have had nearly continuous funding through VA Merit Review grants. It feels like I have been a successful researcher by VA standards. I appreciate the attitude in VA that supports academicians, whether it is teaching or research, as well as the dedicated clinicians. Everyone is treated the same. It makes for good relationships. 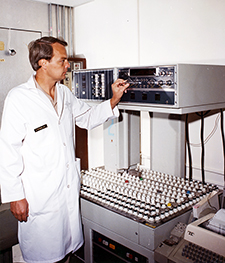 My mother and father were consistently supportive of my intellectual interests. When I was in the military, Dr. Jay Sanford, a famous Infectious disease physician and a great friend of the military, was often a visiting professor at our institution at Brooke Army Medical Center in San Antonio, Texas. He later became dean of the medical school at the Uniformed Services University of the Health Sciences. He was a true inspiration and would be supportive of me for decades.

I was in the ROTC from 1960 to 1964 and in summer camp at Fort Lewis in Washington state in 1963. I delayed active duty so I could attend graduate school at Montana State University from 1964 to 1967 and medical school at the University of Utah from 1967 to 1971. In 1968, I worked as a research technician at Dugway Proving Ground in Utah, and in 1971, I completed a three-month clerkship at Tripler Army Medical Center in Hawaii on active duty as a second lieutenant. I entered active duty in 1974 as a captain and internist at Fort Lee in Virginia, and I completed an infectious disease fellowship at Brooke Army Medical Center, from 1975 to 1977, under the tutelage of Dr. Dale Everett. For the next two years, I was assistant chief of infectious diseases at Brooke Army Medical Center.

I am involved in infectious disease research, specifically gram positive infections caused by pathogens such as group A streptococcus, Staphylococcus aureus, Clostridium perfringens, Clostridium sordellii, Clostrdium septicum, and Clostridium difficile. I am board certified in internal medicine and infectious diseases. Our goals are to understand the pathogenesis of these infections and provide new treatments. We've developed new concepts in antibiotic treatment for these infections. Our work has been widely published. I am chairman of the Infectious Disease Society of America guidelines committee for the diagnosis and management of skin and soft tissue infections. In the last decade, this work has clearly led to better treatment for Veterans with these types of infectious diseases.

Absolutely. As a clinician, I experienced a wide variety of infectious diseases in soldiers brought to Brooke Army Medical Center from all over the world. How these various pathogens caused disease and killed soldiers became of extreme interest to me. I began to focus on the gram positive bacteria and started to develop a fundamental understanding of the virulence factors, specifically bacterial toxins and how they were produced by the microbe. In collaboration with Dr. Robert Allen at Brooke Army Medical Center, we began work to discover how these toxins affected the host response and specifically the immune system. Dr. Allen and I continued to collaborate for several decades even after we both left the military. That work has been the central theme of research that I have performed at the Boise VAMC since 1979. 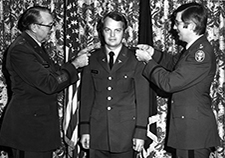 Stevens is promoted to the rank of major at Fort Lee in Virginia in 1975. (U.S. Army photo)

Stevens is promoted to the rank of major at Fort Lee in Virginia in 1975. (U.S. Army photo)

Yes. I know the hardships of serving one's country and the injuries that can occur in combat. Much of our work has centered on horrific infections that active-duty military can endure. In addition, Veterans can develop the same types of infections. They deserve the best possible care. Being a Veteran has improved my compassion for other Veterans and has provided more insight into current and future needs for our Veterans. I also am aware that some Veterans really appreciate that I served in the military. This has improved doctor-patient relationships.

I think your brain and heart have to be in sync when the tasks are difficult and laborious. It takes a lot of work. There are victories and defeats, and the heart is what carries on through those times. One must have a prepared and questioning mind. You can't be a researcher if you believe in the status quo. Pursuing the unknown is reward enough.

You've earned so many honors and awards in your career? What do you attribute that success to?

Having fresh ideas, questioning dogma, having a vision for a program, being honest, and being a good communicator in published research works and verbally at national and international symposia. The greatest honor and award in research is to be recognized for accomplishments by one's peers. Perhaps my greatest achievements are the Society Citation Award I received from the Infectious Diseases Society of America and election to membership in the Association of American Physicians for work I did on severe group A streptococcal infections, such as flesh-eating bacteria. Two articles of mine published by the New England Journal of Medicine were also great awards. Finally, an invited "State of the Art" article that will be published by the New England Journal of Medicine in the next few months was great recognition of my accomplishments. That article will have a large audience, and it summarizes a lot of the work we've done at VA over the years.

In the last six years, I have been instrumental in getting a new basic science research facility built by VA that cost $7.5 million. I also founded a VA-sanctioned non-profit organization named the Idaho Veterans Research and Education Foundation. The foundation began with a $2,000 donation from me and currently has a budget of $500,000, all from overhead from research grants. Last June, we were awarded $10 million from the National Institutes of Health to develop a center of excellence for emerging and re-emerging infectious diseases. This five-year grant comes with renewals for two successive five-year periods. We've hired five new investigators to work on infectious diseases. My next step is to work to make sure all of these new elements are sustainable for the future and to identify a replacement for me who shares the passion and vision that has carried us forth the last few decades.