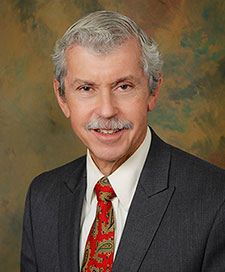 Dr. Daniel Bikle is an endocrinologist at the San Francisco VA Health Care System and a professor of medicine and dermatology at the University of California, San Francisco.

Dr. Daniel Bikle is an endocrinologist at the San Francisco VA Health Care System and a professor of medicine and dermatology at the University of California, San Francisco.

Dr. Daniel Bikle, an Army Veteran, is an endocrinologist at the San Francisco VA Health Care System and a professor of medicine and dermatology at the University of California, San Francisco.  Clinically, he has developed substantial expertise in diseases of bone and mineral metabolism. His research is tailored to major problems facing Veterans, including male osteoporosis, poorly healing fractures and wounds, vitamin D deficiency, and skin cancer. Over a career of more than four decades, he has published hundreds of research papers and contributed to nearly 50 books. He’s also been recognized with some 20 honors, including the Louis V. Avioli Founders Award, one of the top awards from the American Society for Bone and Mineral Research, and the career award in vitamin D research from the Vitamin D Workshop.


Bikle: I enrolled in the Berry plan while I was in medical school at the University of Pennsylvania so I could complete training for my medical residency and graduate studies for my doctorate. This was during the Vietnam War, when all medical graduates were drafted.

While attending Harvard University, I took a course in biology run by Dr. Keith Porter, head of the biology department. He was a pioneer in biology research. The course markedly stimulated my interest in biological research. I subsequently joined Dr. Porter’s laboratory in Woods Hole, Massachusetts, and worked there for two summers, as well as in my senior year at Harvard. I did research that resulted in my senior thesis, which won the Henderson Memorial Prize in Biochemistry at Harvard University and the Baldwin Lucke Memorial Prize at the University of Pennsylvania.

Dr. Porter was my first real inspiration at Harvard. When I graduated, he encouraged me to join the lab of Dr. Howard Rasmussen, chief of biochemistry at the University of Pennsylvania. I participated in the lab while getting my medical degree and continued there for my doctorate. I then joined Dr. Robert Herman when his lab at Fitzsimons Army Medical Center in Denver moved to the Letterman Army Institute of Research (LAIR) in San Francisco. It was time to do my military service. The Herman lab demonstrated to me that academics could thrive in the Army with the right leadership.

I served as a research physician at LAIR from 1974 to 1979. During this time, I continued my research in vitamin D by focusing on its role in intestinal calcium transport. This included human studies with intestinal biopsies, a procedure well established in the Herman lab. I was also able to do clinical investigations into bone mineral research, with new bone imaging techniques. In addition, I served in the endocrine clinic at the Letterman Army Medical Center to which LAIR was attached. After that, I was in the Army reserves from 1979 to 1998. I served for most of that time as backup chief of endocrinology at Walter Reed Army Medical Center. I was in a mobilization destination capacity in case I was called to overseas duty.


What kinds of research are you involved in, and how does it potentially impact Veterans?

My research is related to bone and skin. Regarding bone, I study the hormonal regulation of skeletal development, fracture repair, and osteoarthritis. In skin, I study the role of vitamin D and calcium in keratinocyte differentiation, with current studies in the role of the vitamin D and calcium receptors in wound healing and skin cancer. These subjects are all relevant to Veterans. I believe I’ve made a difference for Veterans with my practice and research.


Is your military experience connected in some way to your VA research?

While at LAIR, I continued my doctorate studies in vitamin D. I focused on intestinal calcium transport. These studies expanded after I joined the faculty at the University of California, San Francisco, and after I came on as a physician at the San Francisco VA Medical Center. The military experience made me appreciate the opportunities in medicine and research in VA.


Do you believe being a Veteran gives you a greater emotional tie to the work you’re doing, or more insight into Veterans’ needs?

There is probably an important bond here. I do not make a point of it, but if patients ask I tell them I’m a Veteran. This probably helps the relationship, although I was never in a battle zone overseas.

It takes hard work and dedication to pursue a career in medicine and research. One must keep learning and stay balanced. A research career can be discouraging with grant and research paper rejections. But it’s very important to believe in yourself, strive to understand, respond positively to critiques, and to seek out others with whom you can collaborate to advance in your work.

I am in the latter stages of my career. However, as long as I enjoy the work and thrill of new discoveries, and am challenged by new opportunities, I plan to stay engaged as long as I remain useful clinically and funded in research.