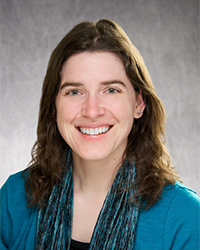 Dr. Amy O’Shea is a biostatistician at the Iowa City VA, where she carries out research on women’s health, observation care, infectious disease, kidney care, and access to care.

Dr. Amy O’Shea, an Army Veteran, is a research health science specialist at the Iowa City VA Health Care System. As a biostatistician, she has carried out research on women’s health, observation care, infectious disease, kidney care, and access to care. She manages complex administrative and health-related data from VA and Medicare sources using computer languages for data management and data analysis, while protecting data security and patient privacy. She’s also a research assistant professor at the University of Iowa and has authored or co-authored nearly 40 peer-reviewed papers. She served in the U.S. Army Reserve from 2001 to 2010 and from 2012 to 2013. Her military honors include the Army Commendation Medal, the Army Achievement Medal, the Army Good Conduct Medal.

When we were in high school, we could take a half day off to take the ASVAB, a test used to determine qualification for enlistment in the U.S. military. My brother was a year behind me and took the test a year after I did. The recruiter called to speak with him and got me instead. When he asked to meet, I said sure, because I didn’t have much else on my plate. After a year abroad, I was just waiting to start my undergraduate studies. Anyway, after speaking with him, I decided to join the military, mostly for the educational benefits. The Army Reserve had a tuition assistance program on top of GI Bill benefits, and after my deployment of 2004 to 2005, my GI Bill benefits increased. I also chose a military occupational specialty that would allow me to work a good-paying summer job.

I’m not sure that I was so much inspired as much as I fell a bit into a research career with a combination of luck and effort. I was working toward a bachelor’s degree when I scored well on a statistics exam. Because I did well, my professor suggested grad school. He told me I could go for free, and I thought, `Why not get more education?’ I applied to several programs and ultimately became a biostatistics student at the University of Iowa, where I worked for several years as a graduate research assistant. I really fell in love with working in health care and moving care forward based on science.

In my work life, Dr. Peter Kaboli, who once held the position as the chief of medicine at the Iowa City VA, is my research mentor. His knowledge is immense, and he really cares about giving me constructive feedback. In my personal life, I really look up to my parents, Connie and Keith Johnson. They gave me a strong foundation of hard work and perseverance. They are not Veterans. 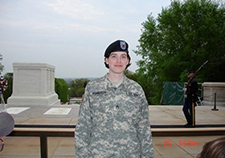 Initially, I served with the United States Army Reserve in St. Cloud, Minnesota. I was a technical engineer, which means that I learned how to do so soils testing, drafting, and surveying. (I think it’s funny that I now work on a totally different kind of survey as a researcher.) I deployed with the 367th Engineer Battalion to Afghanistan, where I mostly worked building airfields and performing surveys to ensure proper drainage. When I came to graduate school at the University of Iowa in 2013, I transferred to the 300th Engineer Detachment in Dubuque, Iowa, where I served as the non-commissioned officer in charge until I left the service.

As a biostatistician, I have worked in different research areas, including women’s health, observational care, infectious disease, and kidney transplantation. I am currently wrapping up a project with VA’s Office of Connected Care that studies associations between patient characteristics, broadband access, and neighborhood social disadvantage, as well as the delivery of primary or mental health care before and during the COVID-19 pandemic. My work focuses on access to care, especially care delivered through telehealth for rural and underserved populations. My goal is to ensure that all Veterans have equitable access to VA care.

I’m not sure that I’d say it was a main driver, but it does feel good to know that the work I’m doing can help Veterans just like me. My experience as a young Veteran from a rural area connects me to what I’m doing now. I can say that VA has come a long way in the past decade to make it easier for rural Veterans to get care.

I think it’s awesome! As a Veteran, it’s amazing to consider that the work I’m doing could directly affect how patients receive care. Improving access, especially for rural populations and Veterans who live where I did as a kid, is near and dear to my heart. I’m so impressed with the work VA has done to make it easier for Veterans to get care, compared with when I applied for VA benefits over a decade ago.

That’s an interesting question. Once you’re a Veteran you are always a Veteran. In my experience, there is a connection that exists between everyone who has served regardless of their branch or when they served. We all have similar experiences that others can’t always relate to. At the same time, those experiences evolve. I’d say that I have insight into what I need, and I expect that at least a portion of what I need is what other Veterans need, as well. The further I am from my military career, the more I realize that there is something universal in the military experience. I hope I bring that experience to the table in everything I do as a VA researcher.

Organizational skills are so necessary. Be prepared. And as most military people know–hurry up and wait. That means you hurry to get prepared. You work as quickly as you can. Then you must have patience while things fall into place.

I was recently awarded a Rural Health Career Development Award through VA’s Office of Rural Health, where I’m working on telehealth and access to care for rural Veterans. This is a big step for me to go from a biostatistician working on the projects of others to really starting a research agenda of my own. I can’t wait to get started!