VA Office of Research and Development 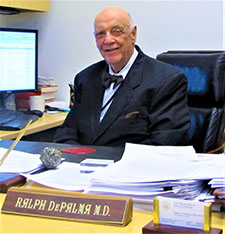 Dr. Ralph DePalma, an Air Force Veteran, is a special operations officer in VA’s Office of Research and Development (ORD). His responsibilities include reviewing ORD’s surgical research portfolio and identifying priority areas in the research of traumatic brain injury and polytrauma. He collaborates on these endeavors with the Department of Defense and other federal agencies. He previously served as VA’s national director of surgery for 10 years. DePalma is a surgeon and teacher who has contributed to advances in treatment for arterial disease, shock, impotence, and venous disorders. He has published and lectured widely on these topics and has edited five books. He has served as a professor and chair of surgery at the University of Nevada and at George Washington University. He earned degrees at Columbia University in New York and the New York University School of Medicine.

We post-World War II children were highly patriotic. We admired those who served to overcome a great evil. We all wanted to serve. I joined the famed New York National Guard 7th Regiment at age 17. I served when it became the 107th Infantry during the Korean War. I volunteered as a surgeon in training as part of the Berry plan. During that time, I was required to serve six years in the U.S. Air Force—three years on active duty and three years in the Air Force Reserve. This period of active military duty was a pivotal time in my life in that I was assigned duties as a base surgeon and a flight surgeon. I was privileged to carry out both responsibilities, increasing my confidence in independent surgical practice and aviation medicine. I applied for a regular commission but eventually chose surgical practice.

On the basis of a competitive exam, I was selected to do research in a physics lab as a high school student in New York City. I worked with Dr. Paul Agron, a former nuclear scientist. Later as an academic surgeon at Case Western Reserve University in Cleveland, I used skills that I had developed to use an electron microscope to define, for the first time, subcellular fine structural changes in the brain due to shock. Notably, I saw changes in the energy producing structures, the mitochondria. Interestingly, similar damage is seen in primary blast injury in the brain.

I have had a series of mentors over the years. Air Force Brigadier General Charles “Chuck” Yeager, the first pilot to fly faster than the speed of sound, took me on my first flight in an F100F fighter in 1958. Air Force Colonel Henry Godman, a pilot in the first full squadron to fly the B-17 Flying Fortress during World War II and later the head of Strategic Air Command, taught me to fly a propeller AC. Dr. William Holden, chair of the department of surgery at University Hospitals in Cleveland, encouraged my research efforts by allowing me use of a laboratory when I was a resident and later a vascular surgeon. Dr. William Insull Jr., a professor of medicine at Case Western Reserve University in Cleveland, helped me define regression of atherosclerosis in response to lipid lowering. Mr. Gary Whitfield, director of the VA Sierra Nevada Health Care System, taught me VA administrative skills. He encouraged research on iron metabolism from 1993 to 2000. 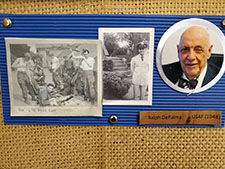 A snapshot of the memorabilia that DePalma, an Air Force Veteran, displays on the wall of his home office.

A snapshot of the memorabilia that DePalma, an Air Force Veteran, displays on the wall of his home office.

I served in the Air Force Strategic Air Command at Morón Air Base in southern Spain from 1958 to 1961. This has long been one of the most strategic points controlled by U.S. forces in Europe. I was there during a tense and confrontational time during the Cold War. We were dedicated to the Strategic Air Command doctrine and discipline related to aircraft capable of nuclear strikes deep into Russia. The fighter squadrons, first with F100s and then the supersonic F104 Starfighters, defended the base.

I have studied surgical trauma and traumatic brain injury and have seen
Veterans in the clinic with these conditions. My work in shock and vascular disease was  a byproduct of this interest, resulting in publication of a study titled “Blast Injuries,” which ran in the New England Journal of Medicine in 2005. I also led the work on VA Cooperative Study 410, the iron and atherosclerosis trial starting in 1998. This was published in the Journal of Vascular Surgery in 2010. This research led to describing the link between iron metabolism, inflammation, and COVID-19, a study published in the journal Metallomics in May 2021.

Yes. The discipline and fellowship I experienced while serving in the Air Force led me to a full-time VA career. My experience in the Air Force with officers and enlisted men brought me into contact with some of the finest people I have ever encountered.

New insights into non-impact traumatic brain injury are important for diagnosing promising treatments to rehabilitate and compensate combat Veterans suffering from head trauma, the “invisible injury” from the post-9/11 conflicts in Iraq and Afghanistan. Based on the research that I have contributed to, the CDC has initiated a new billing code, “Primary Blast Injury of the Brain.” Thus, both DOD and VA will now be able to code for this injury so Veterans can be reimbursed for head trauma. The code has been accepted and has passed public comment. The CDC will publish its final version sometime in the summer of 2022.

During my decade at VA as national director of surgery and later transplantation (2000 to 2010), I developed close friendships with a group of combat Veterans. We had our own breakfast club. I was able to learn a great deal about their attitudes, needs and concerns. We are still in touch!

Dr. Michael DeBakey, the father of modern cardiovascular surgery, often said that “hard work never hurt anyone.” I live by that motto. I also remain disciplined to rise early, which I learned from my surgical mentors: Dr. DeBakey and Dr. Insull. They showed me the importance of writing and editing early in the morning.

I hope to see to it that the diagnosis and treatment of traumatic brain injury progresses to the point of more precise diagnoses of TBI-related brain changes and improved treatment. There are no FDA-approved therapies for treating TBI. I hope to finalize initiation of the new CDC billing code, “Primary Blast Injury of the Brain.” Additionally, based on our studies of iron metabolism, I recommend using ferritin biomarkers for COVID-19 prognosis and to assess treatment effects. [Ferritin is a blood protein that contains iron.] We need to test the efficacy of iron-binding agents to minimize the resulting inflammatory response of the “cytokine storm,” which is resulting in serious illness and deaths from COVID-19.