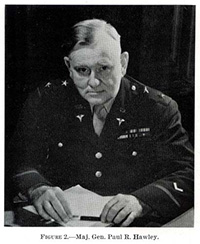 Millions of U.S. soldiers returned to the United States after the end of World War II, swelling the Veteran population. Their vast needs for medical care were overwhelming the Veterans Administration, which was undergoing a major expansion.

Hawley was associated with VA for nearly two years. During that time, he helped enact a measure (Public Law 293) that led to a rebirth of the agency’s near-dormant medical research program, among other accomplishments.

According to “A Historical Look at the Establishment of the Department of Veterans Affairs Research & Development Program” by Dr. Marguerite Hays, Bradley, Hawley, and Magnuson collaborated to push the concept of a VA medical corps through Congress. In his staunch support of Public Law 293, which created sweeping changes to Veterans’ health care, including the launching of VA’s Department of Medicine and Surgery, Hawley told the Senate:

“Unless [Public Law 293] is enacted into law at once, before the recess of Congress, the Medical Service of the Veterans Administration will suffer further grave consequences, which may be irreparable. In the interests of thousands of disabled Veterans who have by their sacrifices earned better medical care than they are now receiving, I urge immediate action on this bill.”

Truman signed the measure into law on Jan. 3, 1946. It enabled VA to recruit and retain top medical personnel by modifying the civil service system.

Hawley, a master planner, was also instrumental in linking VA medicine with the nation’s medical schools. He fought to locate VA hospitals alongside medical schools, giving VA access to specialty care—as well as interns, clerks, and residents—not available in many areas where Congress was trying to direct the construction of new VA facilities.

Every physician would be a `Veteran’s physician’

Equipped with the freedom to hire doctors, improve salaries, and partner with medical schools for the first time, VA’s Department of Medicine and Surgery thrived. Under the new law, physicians leaving the military could now be quickly hired as staff physicians in VA hospitals. Hawley’s goal was to have “every physician in each community designated as a Veteran’s physician,” Hays wrote. He believed physicians and surgeons were the backbone of the nation’s medical system and gave them primary credit for the much-reduced casualty rates in World War II.

During Hawley’s tenure, VA increased its full-time staff of doctors from 600 to more than 4,000. VA hospitals gained about 1,000 residents, after having no physicians in training prior to 1946. Plus, VA’s beneficiary population reached 4 million, and nearly half of VA’s 124 hospitals were affiliated with medical schools. Hawley had dramatically increased the number of physicians, nurses, and social workers employed by VA.

Born in West College Corner, Indiana on Jan. 31, 1891, Hawley attended Indiana University and graduated with a bachelor’s degree. He later earned his medical degree at the University of Cincinnati College of Medicine.

Hawley was commissioned a first lieutenant in the U.S. Army Medical Reserve Corps in 1916. He reached the rank of Major General. After a 30-year career in the Army Medical Corps and his stint in VA, he served as executive director of the American College of Surgeons from 1950 to 1961. He passed away at age 74 on Nov. 24, 1965, following a battle with cancer, and is buried at Arlington National Cemetery in Virginia.