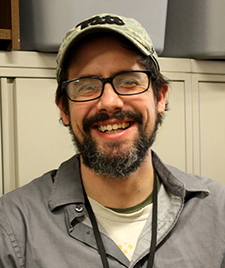 Nicholas Gatto, a Navy Veteran, is a research assistant at the Human Engineering Research Laboratories, a joint project between VA and the University of Pittsburgh.

Nicholas Gatto, a Navy Veteran, is a research assistant at the Human Engineering Research Laboratories, a joint project between VA and the University of Pittsburgh.

Nicholas Gatto, a Navy Veteran, is a research assistant at the Human Engineering Research Laboratories (HERL), a joint project between the VA Pittsburgh Healthcare System and the University of Pittsburgh. He assists in data collection, study coordination, and testing participants in the research of pneumatically powered wheelchairs, which operate through air or gas pressure. He also travels to testing sites and provides pneumatic technology information to the public for use in commercial environments. He served in the Navy from 2004 to 2010 and for four of those years was part of the United States Fleet Marine Forces, a special purpose Naval unit that performs amphibious or expeditionary warfare and maritime duties. He earned a series of medals for his military service, including Combat Action, Meritorious Unit Commendation, and Global War on Terrorism Expeditionary.

Before my time in the military, I had very little direction in my life and not many prospects about my future. I had recently dropped out of college, after realizing I did not want to be an English teacher. I had no other ideas about a career. I bummed around from Ocean City, Maryland, to San Diego, California, for a few years having a good time. But I was ultimately left feeling like I lacked any focus. I knew I loved to travel and that I wanted to eventually go back to college. I met several people who had joined the Navy. It seemed to suit me perfectly at the time to join the military. I will always be proud that I did.

I knew before departing the military that I wanted to continue to work with others who had served. The people I met during my service had become so important to me. I got to see first-hand everything that was involved in caring for service members once they were injured or separated back to the civilian world. I decided to go back to school for the sole purpose of getting a job at VA. I went to the University of Pittsburgh and made it through with excellent support from the school’s office that assists Veterans.

Around my junior year, I attended a Disabled American Veterans event with another Veteran at the University of Pittsburgh. He introduced me to Dr. Rory Cooper, an electrical engineer and the director of HERL. I knew of some other students who had accepted an internship at HERL. After we spoke for a while, Dr. Cooper offered me an opportunity to apply as an intern for the upcoming summer semester. Again, I knew I wanted to focus my career on helping Veterans, and I soon found out there were not many better places to do so than at HERL. Dr. Cooper is by far one of the most inspiring people I have met in terms of focusing on improving the lives of and aiding Veterans. I’m a perfect example. Dr. Cooper took me on as an intern until I graduated and offered me a position at HERL. I am incredibly grateful.

I was always inspired by the officers at the medical clinic during my time with the Marines. Many of them were physician assistants who had come from the Naval Academy or had enlisted after graduating from another college. They were always incredibly reliable and knowledgeable. They were always right there with us no matter the situation and worked harder than anyone else I have seen in the military. Most importantly, it was easy to tell that they just cared deeply for the people they were tasked to take care of, no matter who those people were. That feeling was contagious. Working alongside them always made me feel important, meaningful, and focused. I have that same feeling and inspiration today working alongside Dr. Cooper and Dr. Brad Dicianno, the medical director at HERL. 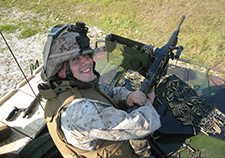 Nicholas Gatto in training at Marine Corps base Camp Lejeune in North Carolina in 2006.

Nicholas Gatto in training at Marine Corps base Camp Lejeune in North Carolina in 2006.

I graduated from boot camp in Great Lakes, Illinois and went to Navy Corpsman school just across the street. Most of the people I had spoken with described the school as an accelerated military style nursing program. I had not studied medicine in the past. But I found out how much I enjoyed it and wanted to learn more, motivated by the idea of so much possible innovation.

I went to fleet Marines service school at Camp Johnson in North Carolina and was attached to a platoon that consisted of 16 Humvees, with either a .50 caliber machine gun or missiles mounted on top with a gunner. The platoon was divided into four squads of four, with each squad having its own corpsman. I was assigned a seat in one of the trucks. There are far too many stories about my time with the Marines. We made two deployments to Anbar Province in Iraq, where we spent 90% of our time living out of our Humvees along the side of the road, most often sleeping where we sat in our trucks. A lot of it was rough. But I am still amazed by the fact that I have been in Iraq. Good or bad, I have had experiences and seen things that a lot of other people never will. I was able to visit places like Dubai, Croatia, and Rome. I got to fire a grenade launcher off the side of a ship in the middle of the ocean. I had some of the best times of my life and met some of my favorite people during that time, even if we had to endure the worst of it.

I needed a break after that. I took orders to the Naval Academy and worked in a clinic trying to keep all of the Navy Midshipmen healthy. I loved it in Annapolis, Maryland, and continued to appreciate the medical field more and more, learning continuously. I somewhat considered reenlisting and had just a few months left on my contract. At that time, however, orders came for a deployment to Afghanistan. The chiefs really wanted me to go. I was assured that if I reenlisted, I would be going almost immediately. I easily decided that was no longer for me. I was almost 30 at that point and felt I had done all I could as a Navy Corpsman.

Every piece of research done at HERL has the potential to improve the lives of Veterans and other people with disabilities. But the top priority is always on those who have served. I’ve been involved with about 10 studies since I began working at HERL, including the StrongArm study on a robotic arm to aid people in wheelchairs. Lately, I’ve been working on a study that assesses the effectiveness of mobility devices used by female Veterans with disabilities and on a study that focuses on replacing electronic mobility devices with pneumatic powered technology. Soon, Veterans in the Pittsburgh area will test these new devices in the hope of proving their benefits. I’ve also been involved in a study on stroke rehabilitation.

As a Navy Corpsman with the Marines, it was easy to see how so many Veterans could come out of the service with an array of disabilities, from training accidents to combat injuries. Throughout my career, I have been tasked in various ways with managing the care of those people. I have developed a deep appreciation for the sacrifices and the sweat that I saw in those around me, and I’ve always felt privileged to play a supportive role. I have always felt a great sense of pride in helping my fellow service members manage their medical care and find solutions. I’m incredibly fortunate to have found a career that allows me to stay on that path.

The possibility of making life better for Veterans through research at HERL is exactly what I wanted out of a career. I am grateful every day for the opportunity. The prospect of innovation and the dynamic nature of research keeps me excited about better options for Veterans, the group of people I care the most about. I feel as though, through service in the military, I have been able to find what I love to do on a larger scale than ever before. I feel like a greater reach is possible to improve the quality of life for Veterans through research. I am fortunate to play a part in that opportunity.

I’m not sure if it’s because of insight, but I know that I trust people who have served in the military differently. They may not know what my specific needs are, but I can always find another Veteran out there to help me fulfill them. I could spend a lifetime paying back all of those who have provided the help that I’ve received. I feel like every possible tie to the work I get to do is to the benefit of Veterans.

Focus is the most important thing for me. At some point, I decided that no matter whatever else I may be doing in my life, I would be involved in the Veteran community. That group would take top priority for me. As with anything else, it does not help me much to be spread too thin over many things or to try to help everyone at once. I think it’s always important to keep what you believe to be the most important thing in mind.

My VA career began only a few months ago. So far, I could not be happier. I am continuing to learn daily and will be working on research certifications. My plan now is to work in some capacity with VA until I retire and, even then, find ways to stay connected.