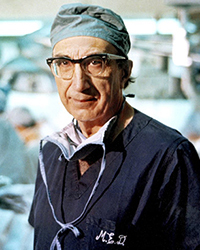 Dr. Michael DeBakey, who served in the U.S. Army during World War II, pioneered many cardiovascular procedures that are widely used today.

Michael DeBakey is known as the father of modern cardiovascular surgery. He was also a chief proponent of VA research following World War II.

He pioneered dozens of medical procedures that are used today to save thousands of lives every year. His research was key to the creation of the heart-lung machine, coronary artery bypass graft surgery, and carotid endarterectomy, the surgical removal of part of the inner lining of the artery. He also performed some of the first heart transplants. His inventions included the roller pump, a key component of heart-lung machines, as well as artificial hearts and ventricular assist pumps.

‘The greatest surgeon ever’

DeBakey continued doing surgery until age 90. He performed over 60,000 operations, published more than 1,600 scientific articles, chapters, and books on aspects of surgery and medicine, and trained thousands of surgeons. He died in 2008 at age 99.

“Many consider Michael E. DeBakey to be the greatest surgeon ever,” the Journal of the American Medical Association wrote in 2005.

During World War II, DeBakey served in the U.S. Army on the staff of the U.S. surgeon general and was a colonel in the Army Reserve. While in Europe, he saw that many soldiers died because their battlefield injuries could not be treated until they were transported to hospitals far behind the front lines. He conducted studies that led to the development of front-line mobile army surgical hospitals, or M.A.S.H. units.

“I proposed to the surgeon general that we make mobile teams out of the personnel at these hospitals and call them auxiliary surgical units—they could be moved where they were needed,” DeBakey once said. “At first, the concept met certain resistance by the old medical establishment, but the surgeon general bought the idea. We put them in every army [unit], and they were a tremendous success. It was recognized as reducing the mortality of the wounded to the lowest level it had been up to that time.”

VA hospital named in his honor

Following the war, DeBakey joined the faculty of the Baylor University College of Medicine in Houston and turned it into one of the country’s top medical institutions. He became the head of the school’s department of surgery and assembled a team top physicians and scientists to develop cardiac-assist devices and artificial hearts. He realized the critical information to be gained from research to learn the long-term outcome of war injuries and recommended to U.S. Surgeon General Norman Kirk a joint effort of VA and the military services to learn about medical outcomes.

Around the same time, DeBakey helped establish a system of treating military personnel returning from the war, a concept that evolved into the Veterans Health Administration system. In Houston, a new naval hospital that became a VA hospital in 1949, as well as Baylor’s hospital, became fully staffed Baylor teaching facilities, with DeBakey training generations of top surgeons from all over the world. In 2003, that VA hospital was named in his honor as the Michael E. DeBakey VA Medical Center.

“The affiliation of the Veterans Administration hospital and the Baylor University College of Medicine,” DeBakey once said, “has served a double purpose: To give Veterans the highest standard of medical care and enable Baylor to give training in some departments available nowhere else in the south.”

Recipient of many awards

DeBakey earned an assortment of awards for his long list of accomplishments. They included the American Medical Association’s Distinguished Service Award in 1959, the Albert Lasker Award for Clinical Research in 1963, the Presidential Medal of Freedom in 1969, and the National Medal of Science in 1987. In 2007, he became only the third physician to receive the Congressional Gold Medal, the highest civilian honor bestowed by the U.S. Congress.

“Dr. DeBakey's medical advances have contributed so much to our country and the world,” Texas Sen. Kay Bailey Hutchison said when he was chosen for the Congressional Gold Medal. “Not only did he perfect the heart transplant procedure, which has saved so many lives, but he also invented the M.A.S.H. unit. As a Veteran of World War II, he saw our young men dying on the battlefield and was determined to improve medical care to save lives. Dr. DeBakey will receive the Congressional Gold Medal for these lasting contributions.”