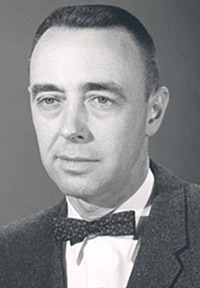 Dr. Leonard Skeggs was a VA clinical chemist who invented the continuous flow analyzer, which changed the character of clinical chemistry testing by easing the process for carrying out routine blood screenings.

In continuous flow analysis, a blood sample is injected into a flowing carrier solution passing rapidly through tubing. The sample is mixed with a reagent, which reacts with the sample to develop a color and determine the concentration of substances, such as diseases or drugs. Continuous flow analyzers are faster and easier to operate than robotic analyzers, which are computer-controlled and require multiple moving parts that deliver reagents and samples to reaction vessels and then to a detector.

To Skeggs, the continuous flow analyzer eliminated what he called the “train of test tubes” required for other testing methods. The machine offered hospitals and labs a low-cost, very accessible method of doing routine blood screenings. The descendants of Skeggs’ instrument today form the basis of automated clinical chemistry.

Skeggs, who served in the Navy during World War II, also worked on one of the first artificial kidneys, collaborating with another scientist at Case Western Reserve University in Cleveland. The new artificial kidney, a considerable improvement over previous prototypes, was widely used in the United States.

Born in Fremont, Ohio, on June 9, 1918, Skeggs attended grade school and high school in Boardman, Ohio, a suburb of Youngstown. His father raised money, hired the president and faculty, and obtained accreditation for Youngstown College, a new four-year college dedicated to the education of students without consideration of race, color, or creed. The school is now known as Youngstown State University.

In 1940, Skeggs graduated from Youngstown College with a degree in chemistry. He then entered graduate school in the biochemistry department at Case Western. He also obtained a fellowship at the Cleveland Clinic, an academic medical center, and worked on the purification of a hormone—inhibin—that was believed to exist in the germinal tissue of the male reproductive cell testes. After nearly two years of research, his work proved the hormone did not exist.

During World War II, Skeggs and his wife worked at a pharmaceutical laboratory that aimed to dry human blood plasma for use on the battlefields. He led the drying process, and his wife headed a group of nurses who separated the plasma from blood collected by the Red Cross.

‘How our chemistries could be automated’

In 1943, Skeggs enlisted in the Navy and went to officer training school at Cornell University in Ithaca, New York. After Cornell, he was assigned to the USS Hovey, a World War I destroyer converted to minesweeping duty during World War II. He soon became a gunnery officer. After a Japanese torpedo sank the ship in the Lingayen Gulf in the Philippines, he was ordered to the USS Earle, a destroyer, as a minesweeping officer. He earned medals including the Purple Heart.

Skeggs returned to graduate school at Case Western and began working on artificial kidneys with Jack Leonards, who headed the biochemistry department. The two designed and built the first flat-plate dialyzer for patients with malfunctioning kidneys. After working with dogs, they used the dialyzer on patients at various hospitals. They also supplied the dialyzer to other scientists, including Belding Scribner of the University of Washington. Scribner revolutionized long-term kidney dialysis and saved millions of lives.

Skeggs earned his doctorate in 1948 and joined the Case Western faculty in 1950. He also joined the hypertension research lab at the VA Hospital in Cleveland—now the Louis Stokes Cleveland VA Medical Center. He was placed in charge of the clinical chemistry lab and learned from control samples that the results of many tests were often misleading.

“I spent many hours thinking how our chemistries could be automated,” he once said. “Just after I got back from lunch one day it suddenly occurred to me—why not do analyses in flowing streams? Later I told my boss, Joe Kahn, the pathologist in charge of the clinical labs, that I thought I knew how to automate chemistries. He insisted that I work on my idea and loaned me the money to proceed. Altogether, I built four different models. At first, I did blood urea nitrogen, then blood sugars. I was pleased that although my machines had mechanical problems, the results were very good, even from the very beginning.”

Skeggs spent several years trying to find a manufacturer. A company (Technicon) heard of the continuous flow analyzer, took it on, and spent three years designing it for production.

“Introduced in 1956, it was an instant success,” Skeggs said of the machine. “Later, I conceived of a machine that could do many analyses on single samples of serum and record the results on a chart in graphical form. This was incorporated into the SMA [Sequential Multiple Analyzer] and finally the SMAC [Sequential Multiple Analyzer plus Computer]. These machines were manufactured and sold to nearly every laboratory all over the world until the early 1990s.”

In 2000, Skeggs received the American Association for Clinical Chemistry’s Edwin F. Ullman Award for Technology Innovation. The award, since discontinued, recognized scientists for contributions to the field of clinical chemistry through the creation of innovative technologies or analytical methods.