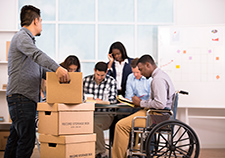 In the first study, "Spinal Cord Injury Vocational Integration Program (SCI-VIP)," Dr. Lisa Ottomanelli and her team followed the progress of 201 Veterans who suffered spinal cord injuries who were seeking employment. The group was split into two parts: Veterans who received standard job search services and Veterans who received specialized support services. Researchers concluded that Veterans who were in the Supported Employment (SE) group were 2.5 times more likely to become employed than those in the control group.

The findings in the first study were used to build a second, longitudinal study that enrolled 213 Veterans with SCI during an episode of inpatient hospital care or outpatient care. Researchers followed subjects over a period of 24 months to determine the effectiveness of Individual Placement and Support (IPS) techniques to help them find and keep employment.

The study, "Predictive Outcome Model Over Time for Employment (PrOMOTE)," found that 43 percent of the Veterans who participated found jobs (92 participants); for those Veterans who had SCI and traumatic brain injury (TBI), the employment rate was 52 percent. In light of the study results, researchers recommended offering IPS services to all Veterans with SCI who were interested in finding jobs.

Ottomanelli is a clinical psychologist at the VA Center of Innovation on Disability and Rehabilitation Research (CINDRR) in Tampa, Florida. She has over 20 years of research experience in the area of disability and rehabilitation.