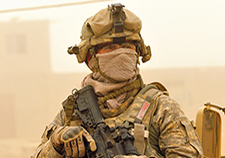 A soldier with the 1st Cavalry Division wears a mask to protect himself from a dust storm in Baghdad, Iraq, in 2009. (Photo by Edwin L. Wriston, U.S. Navy)

A soldier with the 1st Cavalry Division wears a mask to protect himself from a dust storm in Baghdad, Iraq, in 2009. (Photo by Edwin L. Wriston, U.S. Navy)

Under the umbrella of VA's Cooperative Studies Program, VA has funded research to assess the lung health of 4,500 Iraq and Afghanistan Veterans. The study, expected to be launched in 2017, is titled "Service and Health Among Deployed Veterans (SHADE)."

The objective of the study is to find out if exposures to air pollution during deployments to U.S. bases overseas are associated with poor lung function. Of greatest concern is PM2.5, which are particles smaller than 2.5 microns in diameter that can lodge deep in the lungs of Veterans. Researchers will also examine the connection between exposure to PM2.5 and the development of asthma.

Preliminary research to help lay the groundwork for SHADE, is reported in three studies by VA researcher Dr. Eric Garshick and colleagues in the Journal of the Air & Waste Management Association.

In these studies, VA researchers are developing methods to estimate exposures from dust and sandstorms for U.S. troops who fought in Iraq and Afghanistan. The goal is to build reliable tools for epidemiologists to evaluate the relationship between respiratory health in Veterans and exposure to air pollution. To read about the work they are doing see: "Satellites, airport visibility readings shed light on troops' exposure to dust storms, pollution."