Veterans with PTSD like using online technology to manage care 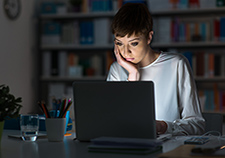 (Photo for illustrative purposes only. ©iStock/demaerre)

(Photo for illustrative purposes only. ©iStock/demaerre)

VA researchers report Veterans with posttraumatic stress disorder (PTSD) that occurs along with other illnesses welcome the use of eHealth tools to help manage their health. The study was published in the October 2016 issue of the Journal of Medical Internet Research.

Dr. Julia M. Whealin is a research health scientist at the National Center for PTSD Pacific Islands Division, in Honolulu. She and her team wanted to find out how Veterans with PTSD and co-occurring health conditions were using health care technology. They mailed surveys to a random sample of 1,500 patients who received care at a VA facility and were registered users of the VA's online personal health record. Of those recruited, 479 Veterans responded to the survey and 119 reported having PTSD with at least one other health condition.

The results revealed that 44.6 percent of Veterans said they used health-related technology one to three times a month, for example, using the computer to look up health information or ordering medical supplies online. Another 21.4 percent of those surveyed said they used technology less than once a month. The researchers found 79 percent of Veterans used technology most often to look up questions about their health online, 71 percent used it to talk to their doctors, and 65 percent used it to keep track of medicines.

After they collected and analyzed the survey results, the researchers held two in-person focus groups to talk to Veterans and ask them how they used technology to manage their health. Five themes appeared: receiving support to cope with symptoms or a crisis, using online tools to manage symptoms, talking to doctors in a timely manner, finding accurate health information, and coordinating care between different doctors.

PTSD that occurs alongside other chronic illnesses is very common in returning Veterans and can complicate treatment. Many researchers, such as Whealin's group, believe that helping Veterans "self-manage" some of their own health care can be an important part of the solution.