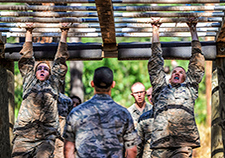 Cadets navigate the monkey bars during basic training at the Air Force Academy in in July 2015. (USAF photo)

Cadets navigate the monkey bars during basic training at the Air Force Academy in in July 2015. (USAF photo)

Male and female Iraq and Afghanistan Veterans do not differ significantly in terms of pain severity, the extent to which pain interferes with their functioning, the severity of symptoms of depression, or the use of prescription opioids, according to a study by a research team led by investigators from the VA Connecticut Healthcare System and Yale University School of Medicine.

The researchers surveyed 662 patients, 56 percent of whom were female, who were enrolled in VA health care between September 2001 and September 2012. Of that group, 460, or 69 percent, reported that they had endured pain for three months or longer, including 67 percent of the men and 71 percent of the women.

The most problematic sites of pain included the back, the joints, and the neck. Headache was also noted as a problem by 12 percent of study participants.

Although the similarities between men and women with respect to pain outweighed the differences, the researchers believe that gender might be a valuable issue to investigate in examining the development of or adaptation to chronic pain. It also should be an important consideration as VA tailors treatment programs to meet the needs of Veterans with chronic pain.