ICU-related PTSD is a risk for both Veterans and civilians 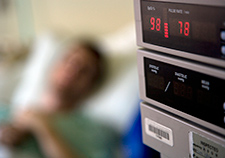 A VA study looked at intensive-care-unit stays as a trigger for PTSD. (Photo: ©iStock/annedehaas)

A VA study looked at intensive-care-unit stays as a trigger for PTSD. (Photo: ©iStock/annedehaas)

One in ten patients is at risk of developing PTSD related to their experience in an intensive care unit for up to a year after their discharge from the unit, according to new research by researchers at the VA Tennessee Valley Healthcare System and Vanderbilt University Medical Center.

The research, which was summarized in a news release from the American Thoracic Society that was reprinted on a number of Web sites, found that pre-existing PTSD and prior depression were strong risk factors associated with ICU-related PTSD at 3 and 12 months post-discharge.

According to Dr. Mayur Patel, staff surgeon and surgical intensivist at the Nashville VAMC, and associate professor of surgery and neurosurgery at Vanderbilt, "Although lower than prior research and public perception suggests, the rate of ICU-related PTSD is very comparable to the...PTSD rates seen in current and former service members deployed to the recent Iraq and Afghanistan conflicts."

"It is important," he concluded, "to understand more about PTSD following the traumatizing events of a critical illness so we can better support the growing number of ICU survivors."