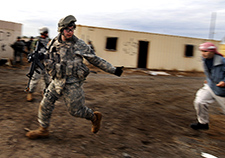 Many service members return from deployment to Iraq and Afghanistan with serious injuries, including TBIs. Others have ongoing psychological health problems, including PTSD, depression, and substance abuse problems.

Researchers with the VA Palo Alto Health Care System, the Defense Health Agency, and Brandeis University looked at the rates of use of the VA health care system and the factors that might predict whether these Veterans use the system in the 365 days following their demobilization from a deployment. Their sample included 125,434 Army National Guard and 48,423 Army Reserve members.

Of those who demobilized during the period from 2008 to 2011, about 57 percent of Army National Guard members and 46 percent of reservists used VA health care within 12 months of their demobilization. The research team plans to further track this group of Veterans over their second and third year post-deployment to see if some members sign up after the first year, and, if so, why they may have waited.

Finally, the team also found that those who lived in the West were substantially less likely to use VA health care than those from the Midwest or the South. They hope the study will provide a foundation for further research, and will be used to develop quality-improvement strategies aimed at reducing disparities and maximizing Veterans' access to care. (Military Medicine, October 2014)