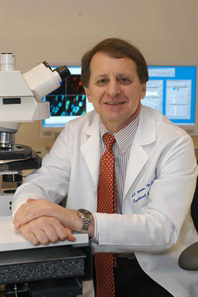 The work of Dr. Stephen G. Waxman, founder of the Neuroscience and Regeneration Research Center at the West Haven VA Medical Center and a professor at Yale University, and Dr. Suleyman Dib-Hajj, also of VA and Yale, were featured in a December Scientific American article titled "Prospects for Treating Chronic Pain Are Improving."

The article stated that an estimated 100 million Americans struggle with chronic pain, most often in the form of back pain, headaches, and arthritis. Chronic pain affects more Americans than diabetes, cancer, and heart disease combined, and according to the article, costs as much as $635 billion a year in medical care and lost labor.

The article cited Waxman and Dibb-Hajj's work confirming that a mutation in a gene involved with the brain's extensive pain network can lead to hyperactivity of a voltage sensor in the body called NaV1.7. Also mentioned was Waxman's work with collaborators in the Netherlands that found this mutation in 30 percent of a group of patients with unexplained pain, and the work of the two investigators in finding that an anti-seizure drug called carbamazepine can calm NAV1.7's hyperactivity.

The article quotes Waxman as saying that these findings are exciting because they suggest that basing pain therapy on the patient's genetic makeup "is not unrealistic." Writer Stephani Sutherland points out that several pharmaceutical companies are now developing drugs targeting the NaV1.7 voltage sensor.