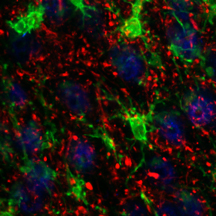 Brain cells called microglia, seen in green, can be seen pruning synapses, in red, in this microscopic image from the brain of a mouse model of frontotemporal dementia. Dr. Eric Huang's research shows that overly aggressive pruning by microglia may drive this form of dementia. (Image courtesy of Huang lab)

A defect in immune cells called microglia may trigger a neurodegenerative condition called frontotemporal dementia (FTD), according to a new international study appearing in the May 5, 2016, edition of Cell.

FTD refers to a group of related conditions resulting from the progressive degeneration of the temporal and frontal lobes of the brain. These areas of the brain play important roles in decision-making, behavioral control, emotion, and language.

Cells called "microglia," part of the immune system in the brain, tackle viruses, bacteria, and dead brain cells and dispose of them through phagocytosis, a type of cellular eating and digestion process. Microglia can also "prune" unneeded neural connections, which are marked for destruction with immune molecules called complement proteins.

The study, led by senior author Dr. Eric Huang, a pathologist at the San Francisco VA Health Care System and professor of pathology at the University of California, San Francisco, showed that in mouse models of FTD caused by a deficiency in the protein progranulin, the microglia were too aggressive in removing these neural connections, often targeting connections that should have been left intact. Think of an overzealous gardener getting carried away pruning his rose bushes.

Huang's team then learned that microglia in progranulin-deficient mice developed excessive levels of microglia activity at a young age. As a result, these mice quickly developed symptoms of neurodegeneration that affected a specific neural circuit such that they excessively groomed themselves. The behavior was reminiscent of the OCD symptoms often seen in people with FTD.

Further testing found that mice without the progranulin gene also created excessive amounts of complement protein C1qa. The team found if they deleted the C1qa gene in mice that already had had their progranulin gene deleted, they could reduce microglia activation, thereby protecting the mice from synapse loss.

By measuring cerebrospinal fluid in humans through spinal taps during autopsies, the researchers found that those who had developed significant levels of dementia during their lifetimes also had high levels of complement proteins. This may mean that these proteins could serve as biomarkers of the progression of dementia, and also provide a means of testing the effectiveness of treatment.

In a UCSF news release, Huang said: "The brain's innate immune system is emerging as a common pathway behind many neurodegenerative disorders," including schizophrenia, Huntington's disease, and Alzheimer's disease. Results from Huang's laboratory also implicated microglial activation as a potential cause for neurodegeneration caused by traumatic brain injury.