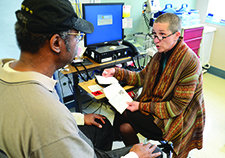 The CONFIRM trial, which began in 2010, is a large multisite study designed to compare the effectiveness of colonoscopies with that of fecal immunochemical testing (FIT) in reducing colon cancer deaths. FIT detects minute amount of blood in the stool, which can be a warning sign of developing cancer.

Participants in the trial are all between 50 and 75 years of age, as advancing age is a risk factor for developing colon cancer. Those who have other risk factors for colon cancer, however, such as having had a close family member with the disease or having inflammatory bowel disease, are excluded from the study.

Each participant completes baseline demographic, medication, and lifestyle questionnaires on issues including their diet, frequency of exercise, and use of non-steroidal anti-inflammatory drugs. They are then assigned randomly to either complete FIT's on an annual basis for 10 years, or to receive colonoscopies consistent with the currently accepted standards of care.

The study's designers hypothesize that colonoscopy will be superior to FIT in preventing colon cancer deaths over a 10-year period. However, the U.S. Preventative Services Task Force recently noted that no empirical data are available to determine which screening strategies for colon cancer have the greatest benefit. The CONFIRM study will directly address this knowledge gap.

More than 40 VA medical centers nationwide are recruiting participants for the trial. The team aims to recruit 50,000 participants in all, who will be followed for 10 years after their recruitment.