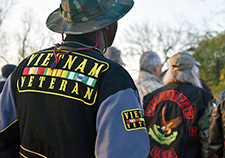 In March 2016, Vietnam Veterans joined together at the Lexington (Ky.) VA Medical Center for a flag-raising ceremony in honor of their service. (Photo by Megan Moloney)

In March 2016, Vietnam Veterans joined together at the Lexington (Ky.) VA Medical Center for a flag-raising ceremony in honor of their service. (Photo by Megan Moloney)

This fall, VA will launch a new large-scale nationwide study to assess the health and well-being of Vietnam and Vietnam-era Veterans, and to compare their health to that of their counterparts who did not serve in the military. The Vietnam Era Health Retrospective Observational Study (VE-HEROeS) will involve some 43,000 Veterans and 11,000 non-Veterans.

A smaller group of participants will be asked for permission to allow researchers to review their medical records. VA will be using a random sample of Veterans and other U.S. households for the study and will not be accepting volunteers.

The study is the first to comprehensively evaluate the physical health and well-being of Vietnam Veterans since the completion of the Vietnam Experience Study. That study was conducted by the Centers for Disease Control in 1988.

As part of this study, researchers will look closely at neurologic conditions and hepatitis C infections. They will also conduct an exploratory investigation on the health of Vietnam Veterans who served only in the Blue Water Navy (those who served in Naval ships off the coast of Vietnam).

Researchers will also ask Veterans about health conditions among their descendants that may have resulted from epigenetic transmission (the possibility that their offspring may have inherited altered traits due to their parents' past experiences, instead of their DNA).

According to Dr. Victoria Davey, the study's principal investigator, when the work is concluded, "VA will be able to answer questions about the long-term health consequences of Vietnam War service, provide clinicians with evidence to explain health conditions, and anticipate future needs for VA health care and services."