From the Acting Chief Research and Development Officer 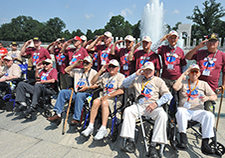 These older Veterans visited the World War II Memorial in Washington, D.C., in 2015, with help from the Greater St. Louis Honor Flight. (Photo by Robert Turtil)

These older Veterans visited the World War II Memorial in Washington, D.C., in 2015, with help from the Greater St. Louis Honor Flight. (Photo by Robert Turtil)

The latest VA statistics indicate that nearly 46 percent of the more than 21 million living Veterans are age 65 or older. However, World War II Veterans no longer make up the majority of older Veterans: Only about 847,000 of the 12 million men and women who served during that conflict are still alive. Of those who served in the Korean conflict, 1.7 million still survive.

The main cohort of older Veterans using VA services is now the 7.1 million surviving Veterans who served from 1961 through 1975, designated by public law as the Vietnam War era.

This newer generation of older Veterans will benefit from the programs VA created for previous generations of aging Veterans, including home- and community-based services and community living centers (CLCs).

Hand in hand with these efforts, our researchers are pursuing new treatments, care models, and preventive strategies to improve the quality of life of all older Veterans, and to support their caregivers. Some are working to improve the effectiveness of existing programs, while others are helping to develop new ones. Much of the work is focused on the needs of those who served in or during the Vietnam War. A new nationwide study, discussed in this issue, will help us anticipate the future needs of this large and important cohort.

We also spotlight a number of other research efforts on behalf of older Veterans: from finding optimal treatments for gout, to improving the mobility of Veterans with Parkinson's disease, to helping Veterans deal with their wartime memories as their life status changes, to improving the culture of our CLCs. I hope you find the information timely and useful.