Does the use of multiple health care systems duplicate or fragment care? 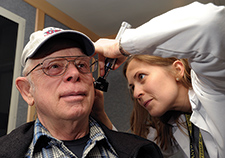 Many Veterans enrolled to receive their health care from VA have alternative sources of insurance, and rely on non-VA providers for some part of their health care. Relatively little is known, however, about the consequences of the dual use of VA and non-VA care.

Researchers from the Providence VA Medical Center and two other VA sites, along with colleagues from three universities and from the Vermont office that manages that state's publicly funded health insurance programs, assessed the health outcomes of Veterans who were enrolled in both VA and a Medicare Advantage plan. (Medicare Advantage plans are managed care plans administered by private health insurance companies that contract with the Centers for Medicare and Medicaid Services.) The researchers also compared the quality of care Veterans enrolled in both plans received with that received by Veterans who received care exclusively from VA.

Using data from 2008 and 2009, the research team identified more than 1,600 Veterans who used only VA care, and about 5,000 Veterans who received care from both systems. The team found no evidence that Veterans who used both VA and Medicare Advantage experienced either improved or worsened intermediate outcomes, compared with Veterans who used VA health care exclusively. Differences in quality of care between the two groups were small and not statistically significant.

The team found that VA-only users had marginally better health outcomes on measures related to hypertension and coronary heart disease control. Veterans who used both systems experienced slightly better outcomes on measures relating to diabetes control. Finally, there was no difference in outcomes between those who visited VA outpatient clinics only a few times, compared with those who had many outpatient visits.

"Although dual use does not appear to have any negative impact on quality of care, we found no evidence that it improves the quality of care Veterans are getting," said Dr. Amal Trivedi, senior author of the study, in an interview with VA Research Currents. "That point needs to be considered in light of the duplicate federal spending that comes along with dual enrollment." (Health Services Research, April 6, 2015, epub ahead of print)