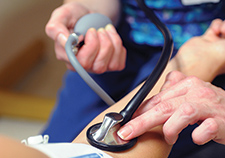 In April 1970, the results of a VA cooperative study on hypertension were published in the Journal of the American Medical Association. The study presented the first definitive evidence that treating moderate hypertension was beneficial in preventing or delaying many of its catastrophic health complications.

The late Dr. Edward Freis of the Washington, D.C., VA Medical Center was the study's leader. In 1971, he received the Albert Lasker Clinical Medical Research Award, one of the most respected science prizes in the world, for demonstrating the life-saving effectiveness of drugs to treat moderate hypertension, and the dramatic reduction of deaths from stroke and congestive heart failure that can be realized when blood pressure is kept within normal limits.

Nearly 50 years later, however, researchers still do not know just what those normal limits are—and how low blood pressure should be pushed. The New York Times wrote about an ongoing large and rigorous study funded by the NIH, called the Systolic Blood Pressure Intervention Trial (SPRINT)—and interviewed two VA researchers on the study's significance and possible value.

The nine-year, $114-million study is being conducted at more than 80 sites in the United States. One of the study's five "lead centers" is the Memphis (Tenn.) VA Medical Center.

The study will attempt to determine the appropriateness of current clinical guidelines that call for a systolic pressure (the top number in a blood pressure reading) of less than 140 millimeters of mercury (mm Hg) for healthy adults, and 130 mm Hg for adults with kidney disease or diabetes. Researchers will do this by evaluating the potential benefits of maintaining systolic blood pressure at less than 120 mm Hg for adults who are at risk for heart disease and kidney disease. SPRINT is scheduled to be completed in 2017.

The Times wrote about an interaction between Dr. J. Michael Gaziano, a researcher and physician with the Boston VA Health Care System and Harvard University, and a patient who has lost 60 pounds under Gaziano's care, and whose systolic pressure had been significantly reduced. It also interviewed Dr. William C. Cushman, chief of preventive medicine at the Memphis VA, on the history and current status of hypertension research, and on the reasons currently accepted levels are being questioned by researchers.

"If SPRINT shows that below 120 is clearly better, that will change the whole landscape," Cushman said. But if the study finds that below 120 is no better than below 140, "we are left where we are now. You never know what you will find in a study until you open the envelope."