New experimental drug may halt the progress of Alzheimer's disease 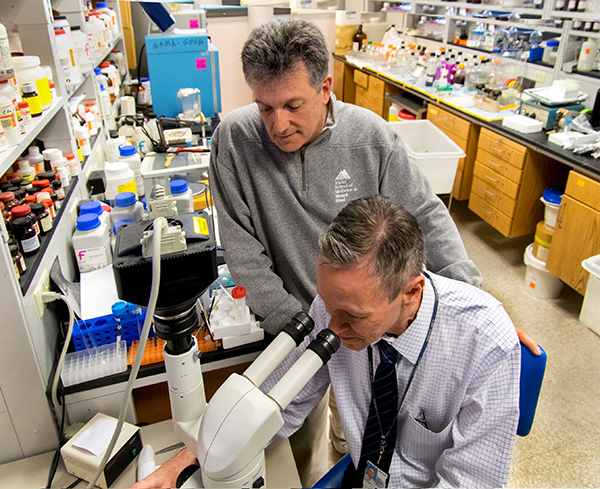 Proteins in the brain known as Group II metabotropic glutamate receptors (mGluR) normally bind with glutamate, a neurotransmitter that is abundant in the brain, to enable memory or other brain functions. Neurotransmitters are substances that transmit brain impulses across a synapse, the gap between two nerve cells.

These receptors, however, also play a role in Alzheimer's disease. They are central to the production of beta amyloid, one of the main signs of Alzheimer's. Beta amyloid is a protein fragment that forms into clumps that lead to nerve cell death.

Researchers led by Dr. Sam Gandy of the James J. Peters VA Medical Center in the Bronx and Mount Sinai Medical Center tested a drug that can target and inhibit Group II mGluR receptors. The drug, BCI-838, was given to Alzheimer's mice over three months. The mice showed improved learning and reduced anxiety. They also showed reductions in the levels of beta amyloid in their brains—and even showed an increase in the formation of new brain cells, or neurons, in the hippocampus, a part of the brain crucial for memory.

BCI-838 was also tested in healthy humans in a two-week clinical trial, and found to be safe and readily absorbed in the body. The next step will be to begin testing the drug for safety in older adults who have mild Alzheimer's or its precursor, mild cognitive impairment.

"We are cautiously hopeful that this drug might arrest Alzheimer's disease at an early stage so that patients can remain functional for more expended periods," Gandy said in a news release distributed by the Cure Alzheimer's Fund, which helps support the research. Gandy also hopes that the new drug may also have the potential to help Veterans with traumatic brain injury, and is part of a research team looking at that possibility. (Molecular Psychiatry, Nov. 2014)