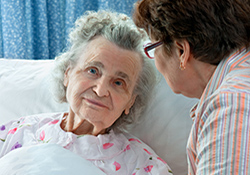 A VA study explored the impact that family involvement has on end-of-life care. (Photo: iStock)

A VA study explored the impact that family involvement has on end-of-life care. (Photo: iStock)

At the end of their lives, most patients lose the ability to make decisions about their own care. When that happens, and even before, the families of many patients get involved in decision-making on their loved ones' behalf.

Researchers with the division of geriatrics at the San Francisco VA Medical Center looked at the records of 34,290 Veterans who died at any of 146 VA facilities between 2010 and 2011. They divided those Veterans into two groups: those whose records showed that the Veteran's family had had documented discussions with his or her health care team in the last month of life, and those whose families had no involvement.

The researchers found that those Veterans whose families were involved in their care were more likely to have had a discussion about palliative care (care for patients with serious, chronic, and life-threatening illnesses that focuses on improving life and providing comfort) with their health care team. They were also more likely to have been visited by chaplains, and to have had a do-not-resuscitate order on file. Such orders instruct doctors, nurses, and emergency medical personnel to not attempt emergency cardiopulmonary resuscitation should a patient's heartbeat or breathing stop.

Patients whose families were involved in their end-of-life care were not, however, more likely to die in either a hospice or palliative care unit than those whose families had no documented discussions with the patient's health care team in the last month of their lives. The researchers concluded that for vulnerable patients who may lack family and friends, clinicians should support early advance care planning so that these Veterans' end-of-life wishes can be known and followed. (Journal of Pain and Symptom Management, May 2, 2014, epub ahead of print.)