Dr. Timothy Wilt is the 2014 recipient of VA's Under Secretary's Award for Outstanding Achievement in Health Services Research. Wilt, director of the Evidence Synthesis Program at the Minneapolis VA Medical Center, and a core investigator for the Center for Chronic Disease Outcomes Research at Minneapolis, led VA's Prostate Cancer Intervention vs. Observation Trial (PIVOT), which showed that watchful waiting was as effective as radical surgery for men with early stage prostate cancer. He also led a team of experts in developing breast cancer screening recommendations that more carefully balance benefits against harms.

The Under Secretary's award is given annually to an investigator who has significantly enhanced the understanding of factors affecting the health of America's Veterans, or conducted research that has led to a major improvement in the quality of Veterans' health care; inspired a new generation of investigators; and enhanced the visibility and reputation of VA research through national leadership in the research community. 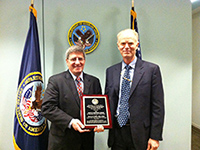 Dr. Steven Kahn, who has led a number of highly regarded, large-scale clinical trials in the prevention and treatment of type 2 diabetes, has received VA's John Blair Barnwell Award for 2014. Kahn, a physician-researcher at VA's Puget Sound Health Care System, has been widely acclaimed for his ability to combine basic and clinical research approaches.

Kahn's leadership on many important clinical trials sponsored by VA and the National Institute of Diabetes and Digestive and Kidney Diseases, part of the National Institutes of Health, underscores the crucial role VA plays in many major nationwide trials that involve NIH or other federal partners.

The Barnwell Award honors outstanding achievement in clinical science, and recognizes senior VHA investigators who have achieved international acclaim for clinical research accomplishments in areas of prime importance to VA's research mission and demonstrated a high level of clinical commitment to the patient population.

Dr. Roy D. Bloebaum, director of the Bone and Joint Research Laboratory at the VA Salt Lake City Health Care System, has been awarded VA's Paul B. Magnuson Award for 2014 for his work in helping to create the next generation of prosthetic limbs and joints.

Bloebaum and his team of multidisciplinary investigators have focused on osseointegrative devices, which allow prostheses to be attached directly to a patient's bone, eliminating the need for socket technology. These implants offer hope to Veterans who, due to the nature of their limb loss, cannot be fitted for conventional prostheses that rely on sockets. In 2012, the U.S. Food and Drug Administration selected Bloebaum's team to conduct an early feasibility study to implant such devices in 10 Veterans with limb loss.

The Magnuson award honors the life and legacy of Paul B Magnuson, M.D., who, as a bone and joint surgeon, continuously sought new treatments and devices to help his patients cope with their disability. The award is presented annually to a VA investigator who exemplifies the entrepreneurship, humanitarianism, and dedication to Veterans displayed by Dr. Magnuson.

The William S. Middleton Award is the highest honor awarded annually by VA's Biomedical Laboratory R&D Service. It goes to a senior research scientist in recognition of outstanding scientific contributions and achievements in the areas of biomedical and behavioral research relevant to the health care of Veterans. The award is named for William S. Middleton, M.D., a former VA chief medical director who was instrumental in initiating and stimulating VA medical research. This year, two VA investigators received the award: Dr. Dale Gerding and Dr. Raj Goyal.

Gerding, a research physician at the Edward Hines, Jr. VA Hospital in Chicago, was honored for his significant contributions to the epidemiology, pathogenesis, diagnosis, and treatment of hospital infections. Gerding's work has helped health care providers prevent and treat infection from C. difficile, a superbug that can cause severe diarrhea and in some instances may be life-threatening. Among those most susceptible to the bug are nursing home residents and elderly hospital patients. Gerding has also served in several leadership roles at VA, including eight years as associate chief of staff for research and development at the Hines VA Hospital.

Goyal is the director of the Swallowing and Motility Program and the associate chief of research and development at the West Roxbury Campus of the VA Boston Health Care System. Goyal is nationally and internationally recognized for research that has advanced the diagnosis and treatment of esophageal diseases and gastrointestinal motility disorders (diseases of the gut). His work, and that of his team, has provided the foundation for the current understanding of major clinical disorders such as gastroesophageal reflux disease (GERD), irritable bowel syndrome, and swallowing disorders, among others. His research also led to the development of the standards used today for the diagnosis, screening, and surveillance of disorders such as Barrett's esophagus (a complication of GERD) and esophageal cancer. Goyal has previously worked at the Houston and Dallas VA medical centers, both as a consulting gastroenterologist and as a mentor to fellows in clinical gastroenterology and research. 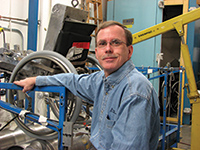 Dr. Rory Cooper is one of 12 recipients of the International 2014 Henry Viscardi Achievement Awards. These awards honor leaders in the disability community who have had a major impact on shaping attitudes, raising awareness, and improving the quality of life of people with disabilities.

In addition to the Viscardi award, Cooper received the 2014 Joseph F. Engleberger Award for Application in Robotics. The award, the robotics industry's highest honor, was presented to him in June at the 45th International Symposium on Robotics in Munich, Germany.

Cooper, who has a spinal cord injury himself and uses a wheelchair for mobility, is the director of VA's Human Engineering Research Laboratories, where investigators develop and test innovative technologies related to wheelchairs and mobility. He is also a distinguished professor at the University of Pittsburgh, and is the co-director of the National Science Foundation's Quality of Life Technology Engineering Research Center.

Dr. Rajiv Mohan, a research health scientist at the Harry S. Truman Veterans Center in Kansas City, Mo., has been awarded the Mahatma Gandhi Pravasi Samma award by the Non-Resident Indians Welfare Society of India. The award honors outstanding service and accomplishments by Indians in the international arena.

Mohan, who came to the United States 20 years ago, conducts research in areas of ophthalmology that include corneal gene therapy, corneal nanomedicine, corneal wound healing, corneal scarring and angiogenesis, and refractive laser surgery. His work includes more than 100 articles in scientific journals, seven book chapters, and more than 200 scientific presentations. He is also the Ruth M. Krawuchi-endowed professor in Veterinary Ophthalmology at the University of Missouri College of Veterinary Medicine, and was named a 2014 Silver Fellow by the Association for Research in Vision and Ophthalmology, the largest eye and vision research organization in the world. This award recognizes him for his individual accomplishments, leadership, and contributions to the association.

Dr. Michael Gaziano inducted into the Royal College of Physicians

The London-based Royal College of Physicians, an organization that has supported and represented physicians for nearly 500 years, has inducted Dr. Michael Gaziano into its ranks. Gaziano is an internationally recognized chronic disease epidemiologist and trialist.

He is one of the directors of the Massachusetts Veterans Epidemiology Research and Information Center (MAVERIC), located at the VA Boston Healthcare System. He is also one of the national principal investigators for the Million Veteran Program. At the Boston VA, he runs a preventive cardiology program with an associated fellowship.

In addition to his VA work, Gaziano is a professor of medicine at Harvard Medical School, serves as the chief of the division of aging at Brigham and Women's Hospital, and is principal investigator on the ongoing Physicians' Health Study (PHS). PHS is a large-scale mail-based cohort comprised of 29,000 physicians who have been followed for up to 30 years.