Ocular tremor does not originate from head movements 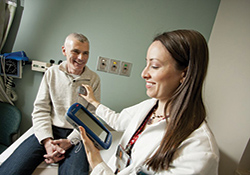 Richard Hutton, who has Parkinson's disease, receives care at the PADRECC at the Philadelphia VAMC. VA researchers studied a type of gaze abnormality as a possible early warning sign of the disease. (Photo by Tommy Leonardi)

Richard Hutton, who has Parkinson's disease, receives care at the PADRECC at the Philadelphia VAMC. VA researchers studied a type of gaze abnormality as a possible early warning sign of the disease. (Photo by Tommy Leonardi)

In 2012, researchers at the Richmond VA Medical Center and Virginia Commonwealth University, led by Dr. Mark S. Baron, found that patients with Parkinson's disease (PD), even those with a recent diagnosis, displayed an "ocular tremor" that was not found in non-Parkinson's patients.

All of the 112 PD patients, whether on medication or not, showed an inability to maintain a stable fixed gaze when shown a target on a computer screen. Only two of the 60 healthy participants had the same problem, and one of those went on to develop PD symptoms within two years. The research team concluded, therefore, that ocular tremors are pervasive in PD—and could be an early warning sign of the movement disorder.

Other researchers looked at the results of that study and hypothesized that the inability to maintain a stable fixed gaze was not caused by ocular tremors but instead by movements of the subjects' heads. In response, the Richmond team conducted an additional study that looked at eye movements in eight Veterans with Parkinson's disease both with their heads free, and with their heads restrained by a head-holding device and a dental impression bite plate.

They found that ocular tremor was observed in all of the study participants, and that it was not influenced by the head being either free or fixed. The team's findings therefore supported their initial finding that ocular tremor may be a reliable clinical biomarker for PD. (Parkinsonism and Related Disorders, July 2014)