New blood test to diagnose Alzheimer's found to be feasible 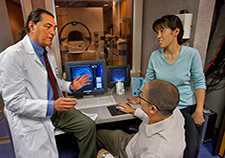 A recent study by researchers with VA, UCLA, and other institutions provided evidence that a simple blood test can be developed to confirm the presence of beta amyloid proteins in the brain, a hallmark of Alzheimer's disease. The story was covered by CBS Los Angeles and other media outlets.

Although some 5 million Americans are living with Alzheimer's, there is no reliable blood-based test to indicate the presence of the disease. At present, Alzheimer's disease can be definitively diagnosed only by examining brain tissue after death. While people are alive, physicians must rely on proxy measures, or biomarkers, along with cognitive symptoms such as memory loss.

The study team developed a simple signature to predict the presence of brain amyloidosis (the buildup of amyloid in the brain) that included several blood proteins known to be associated with Alzheimer's disease, along with clinical information such as results of memory testing and MRI scans.

Using blood samples and other data from patients with mild cognitive impairment from the Alzheimer's Disease Neuroimaging Initiative—a public-private partnership started by VA, NIH, and others in 2004—the research team found their method could be used to predict the presence of amyloid in the brain with modest accuracy.

Although there is no treatment that can halt or reverse the progression of Alzheimer's disease, a non-invasive, inexpensive, and reliable test for diagnosing the disease could spare people with dementia and their families the anxiety associated with uncertainty, direct them to support services earlier, and improve their likelihood of benefiting from current and future advances in treatment.