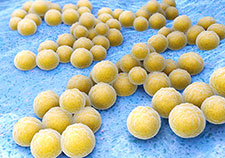 Hospitalized Veterans are less likely to die from a staph infection in the bloodstream if they receive prompt treatment that includes taking pictures of the heart. (Photo ©iStock/iLexx)

Hospitalized Veterans are less likely to die from a staph infection in the bloodstream if they receive prompt treatment that includes taking pictures of the heart. (Photo ©iStock/iLexx)

A team of VA researchers led by Dr. Michihiko Goto at the Iowa City VA Health Care System published a study in JAMA Internal Medicine that demonstrated the potential benefit of using specific care measures to prevent deaths related to staph infections in the bloodstream.

Staphylococcus aureus is a bacterial infection commonly referred to as a "staph infection." When it occurs in the bloodstream it is called staphylococcus aureus bacteremia (SAB). Once it infects the blood, it can travel to internal organs and cause infections in places like the heart, joints, or even implanted surgical devices. It is typically associated with poor outcomes, especially among hospitalized patients whose immune systems have already been weakened by other illnesses or surgery.

Anecdotal evidence has suggested that eliminating the source infection early on, imaging the heart to look for endocarditis (infection of the inner lining of the heart), using appropriate antibiotic prescribing practices, and consulting an infectious disease specialist could improve outcomes for patients with SAB. However, it was unknown whether these practices could be responsible for a large-scale reduction in patient deaths from SAB.

After adjusting the study results for variables like patient characteristics, age, and different care practices, the researchers concluded that the above-mentioned interventions were associated with a 57.3 percent reduction in mortality from SAB infection during the study period. They also found that the interventions had an additive effect: the more evidence-based care a Veteran received, the lower his or her chances were of dying from SAB.

Because staph organisms are very resilient, they are hard to disinfect and can easily be transmitted person to person, or even through contact with a contaminated surface like a countertop. Staph can also become resistant to antibiotics. A case in point is methicillin-resistant staphylococcus aureus, or MRSA—a major problem for hospitals and patients.